Meet the first full time Chaplain for a private hospital 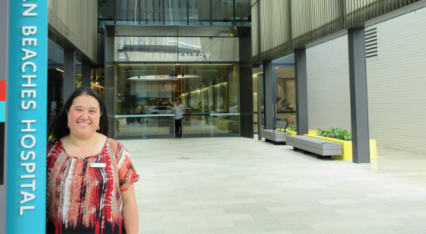 The Rev Emily Carpenter meets me at the entrance to the Northern Beaches Hospital with her guitar slung over her shoulder. It’s not your average tool for an Anglicare chaplain, but it’s a new hospital with different rules, so she’s using all the skills she has to care for patients.

The role of a chaplain in a brand new, private hospital

“I visit the paediatric ward and offer to play guitar for them,” she says. “I bring some shakers and stickers and stamps in the hope that I can play some songs for them – and then maybe also play some Colin Buchanan songs as well.

"The ability to bring Jesus is very valuable"

“It’s a tricky situation because you can’t just walk in [and] the kids might be asleep. Also, I’ve only been confident with my under-5s songs so far. I need to learn some songs for older kids!”

The reason Mrs Carpenter says “so far” is that she only began in her role at the beginning of February. Not to mention that this brand-new hospital is also private.

Here to care for doctors and patients

“Chaplains generally get a list of patients to visit [from their denomination], but in this hospital I’m not allowed to walk around the wards and knock on doors,” she explains. “Visits are basically by referral, and there aren’t a lot of referrals yet because we’re new, so staff tend to forget that we’re around.

“One of my main aims since I started has been to meet as many people as possible and get to know them. I’ve been making muffins for staff on all the different wards, and security… and have found this has opened up opportunities for us to talk. They’re always really busy, so if I was to just go along and introduce myself it wouldn’t be as effective. But when I bring a box of muffins it opens up their friendliness.

“When I was in the ICU, I had a doctor say to me, ‘Why are you doing this?’ I told him, ‘I’m a hospital chaplain and I’m here to care for you guys and the patients’ – to let them know we’re here for them as well. Because a lot of the time staff just assume you’re only there for the patients.”

While most visits require a referral, Mrs Carpenter has been given an open invitation from staff in the mental health ward to come in and spend time with the patients. She goes in regularly for conversation, prayer and music sessions, and while only a handful of patients link up with her, feedback has already included that her presence has “uplifted me for the day”.

“Things like that are wonderful to hear,” she says.

The manager of health and justice chaplains at Anglicare, the Rev Stephen Gibson, says Mrs Carpenter’s position “is our first foray into having a full-time chaplain in a private hospital… we pray it might be the first of many. It’s a wonderful example of what is now possible through Anglicare in partnership with local parishes.”

Mrs Carpenter has sought to contact all the local Anglican clergy to let them know she is available to visit congregation members in the NBH, and to ask them to support her financially or through prayer.

"People are hurting and want to chat"

“I’d love people to pray for me as I meet staff – that I can get to know them and they will remember to refer me to their patients,” she says. “And then, pray for the chaplaincy and pastoral care team we’re trying to build here, that we’ll be able to have volunteers join the team as soon as it’s appropriate and that there will be open doors to share the love and joy found in Christ.

“There are a lot of people who are hurting and wanting to chat. People go through hard things in hospital, have many worries and anxieties, and to be able to bring Jesus and hope and just a listening ear is very valuable.”