The Rev Kanishka Raffel has been appointed the new Dean of Sydney, the first person from a non-European background to hold the position.

“I’m delighted Kanishka has accepted my appointment, which was unanimously agreed to by the Chapter, to become the next Dean of Sydney” said Archbishop Glenn Davies in announcing the move.

Mr Raffel has been the senior minister at St Matthew’s, Shenton Park in Perth since 1999.

Born to Sri-Lankan parents in London, Mr Raffel and his family emigrated to Australia from Canada. He was raised a Buddhist and converted to Christianity in his twenties.

“Kanishka has exercised a valuable ministry in Perth and although it is a big wrench for him and his family to return to Sydney, I appreciate the sacrifices that are involved.” Dr Davies said.

The Archbishop described the new Dean as “an outstanding teacher of the Bible who, God willing, will have a significant ministry to the city of Sydney.”

“Kanishka preaches with a pastor’s heart and his care and concern for people will be evident throughout his ministry” Dr Davies said.

"I'm very excited about the opportunities for proclaiming the majesty and mercy of Jesus in the heart of the city of Sydney," Mr Raffel said. 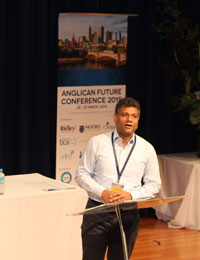 “I was a student minister at the Cathedral when I was at Moore College.  It's an immense privilege to be returning there to serve the Lord."

The Anglican Cathedral, standing beside Sydney Town Hall, has seen significant changes in city population, especially in the last quarter of a century. It now has a large proportion of congregants of Asian or sub-continental background.

The population of the City of Sydney has almost doubled in the past two decades, with 56% of the population having both parents born overseas, compared with a state average of 36%.

"The bustle and glamour of a big city only thinly veils human hearts full of longing.  The Cathedral is well placed to address those longings with the deep satisfaction of knowing Christ" the new Dean said.