On this block I build my church 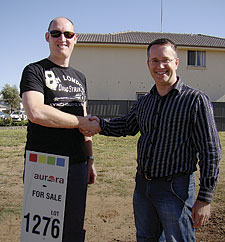 When completed, the development will stretch across an area equivalent in length to St Andrews Cathedral to Ashfield.

The first suburb of this new development is Ropes Crossing and people have already been moving into new homes for the past year and a half.

SC reported last year that rector, the Rev David Clarke was having trouble finding someone to plant a church in the new area.

"The Mission Property Committee has unfortunately not been able to fund the purchasing of property in this vast area, and with the likelihood of a regional grant to fund a church planter looking slim…what we really needed was someone willing to think like a missionary,raise their own funding, and be willing to start without being given a house and building,” he says.

“We praise God that he was at work preparing just the right people and that he brought Peter and Elizabeth Wood (currently assistant minister at Seven Hills) and David Clarke (rector of St Marys) together.”

Meanwhile on the other side of Western Sydney

At the same time, Seven Hills assistant minister the Rev Peter Wood and his wife Elizabeth knew of the article and were seriously considering such a move.

Â "A lot of people were challenged by Mark Driscoll last year. Many of them felt the push to do things outside their comfort zone," he says.

"We experienced something different: the permission to live on the edge for the sake of God's kingdom," Mr Woods says, adding that he’s not church-planting “for the sake of following the current trend”.

“Ropes Crossing needs a church because the local community is so different to the surrounding suburbs that it seems to have little interest in what Christians from those suburbs might have to say to it.

"We are convinced that the only way that Jesus will be spoken about in Ropes Crossing is by Christians living there and sharing the truth of Jesus on the inside," Mr Woods says.Â

This led the Woods to buy a block of land in Ropes Crossing, on which they will build a house, which will be the base for their church plant.

They finish at Seven Hills at the end of 2009, trusting God will provide what they need to make the church plant work.

"Ideally, financial support can be found. Otherwise, we are prepared to work to support our ministry. However, the more time we are at work the less time we have for ministry. We would love for mission-minded Christians to partner with us " join us prayerfully, financially or by moving in as well."