Sustainable Growth: “We are planting two gatherings a year” 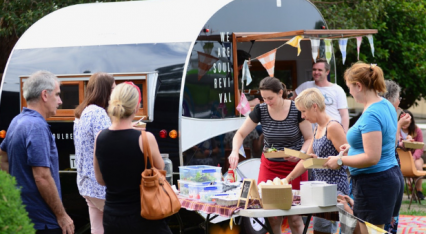 For these believers, Jesus changes everything including the way they do church. And it’s striking a chord in the Sutherland Shire.

Soul Revival Church have just expanded to three campuses across the region, now meeting at Kirrawee, Woolooware and Yarrawarrah, and there are no signs of slowing down.

So what makes Soul Revival different?

“We’re trying to come up with a new approach in Sydney, and we’re finding it working for the church,” Mr Crawshaw says. “What we talk about is an all-age, all-stage church.

“We preach the gospel, we say Jesus changed everything when he died and rose, and that what we do as a church is we share the love of Jesus person to person, generation to generation, culture to culture, place to place. That’s our own language for when people say we’re community, we say we’re a gospel community.”

Every Soul Revival service is geared to building this gospel community culture. Each gathering includes a meal, which means the church feeds up to 440 people across the weekend.

“Everyone sits down together to a home-cooked meal, and for [some] campuses we have a food truck,” Mr Crawshaw says. He sees these meal times as an important aspect of growing and developing a culture that is cross-generational.

As the leadership works to help the new gatherings in Kirrawee and Yarrawarrah, the focus is on seeing the gospel shape and change lives.

“When we start a new gathering, we celebrate the people who come to know Jesus through the new gathering,” Mr Crawshaw says. “We say we’re keen to have conversations about faith with people.

“We preach the gospel clearly and welcome those who are Christian and not Christians to discuss what we believe. Every week we could have five or six non-Christians and the meal gives them a chance to chat with people about what they’ve heard.”

Soul Revival’s clear Bible teaching and low-key, yet creative approach to gatherings has resulted in one quarter of its congregation coming from a non-church background. In the future, Mr Crawshaw hopes to see even more people engage with Christ and be transformed.

“We just try and make Jesus the key person, so that everyone knows what we’re on about,” he says. “It’s exciting that we can be optimistic and positive about what Jesus is doing. It can seem like Christians are on the back foot in the media, but we’re seeing the gospel grow and lots of people excited to respond.”