A Sudanese congregation in Western Sydney is introducing hundreds to Jesus 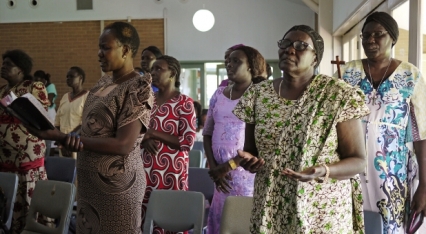 Deep in the western suburbs of Sydney, there is a vision emerging. A vibrant church is growing at Oakhurst, a suburb in the Blacktown area, bordered by Plumpton and Bidwell.

But on any Sunday there is good news ringing out as 150 to 200 members of the Sudanese community meet for a Dinka language service.

The children are mainly Australian-born, but the parents and some of the youth came to Australia from the civil war turmoil of South Sudan, often via refugee camps in Kenya.

Their pastor, the Rev Samuel John, has a vision, which begins with introducing people to Jesus. "In South Sudan, and in Africa in general, many people call themselves Christian," he tells Southern Cross.

"You know, they call themselves Christian as an identity, not to follow Christ fully. This is the thing that we want to work on. To make sure we understand what Scripture says and to live like Christians."

Pastor John speaks quickly and with passion. He is balancing a growing family with theological study. Ordained a deacon in Kenya after being forced out of South Sudan, he has now finished an Advanced Diploma at Moore College and graduates this month. He is also doing further study at Sydney Missionary and Bible College.

He works at Oakhurst as assistant minister overseeing the Sudanese congregation while the new rector, the Rev Jason Ramsay, runs the family and night services. Both have a vision to grow the Sudanese congregation. Says Pastor John: "In the next five or 10 years, we are thinking to get a bigger church or a bigger place that will accommodate us. Maybe we can purchase land and build, or we can get an old church and then transform it. It will depend, you know, on what God will show us.

"In the next five or 10 years, we are thinking to get a bigger church"

Most people in the Sudanese congregation come from the western suburbs but, Pastor John says, “some come from Campbelltown, some even from Caringbah because they want to worship in Dinka".

The church is also looking outward by supporting an Anglican Aid project to train Christian leaders from all over the young nation of South Sudan, through Bishop Gwynne College in the city of Juba.

Despite a vision to have their own building one day, being at Oakhurst has its advantages. "Our children are mixing now with white Anglo Australians,” Pastor John says. “We've got what we call ‘Christ for Kids’ on Monday night. So our children go together and they mix up with Australian kids and they do Bible studies together.

“This is very important actually, because we will be one church one day, or maybe the Sudanese or African church will be a church where you have no boundaries. So that means you're not going to be only Sudanese – they will be open to all other nations."

"We will be one Church, one day"