Sydney Synod has expressed deep concern about moves to remove gender from the marriage act and has authorised the distribution of a booklet outlining the consequences of same-sex marriage for families and society.

Debate on the third night of Synod was led by Bishop Michael Stead, who chairs the Archbishop’s Plebiscite Task Force (pictured above) and the Dean, Kanishka Raffel.

"The whole question of whether we are allowed to have a discussion in Australia on same-sex marriage is in a state of flux." Bishop Stead said. "You will be aware that Labor has committed to block the plebiscite machinery legislation in the Senate, so the plebiscite is off the table (at least for now).  But this latest political manoeuvring does not change the essence of the motion; it just changes the timing. The motion is premised on the idea that we can have a civil and respectful public discussion on this issue – and not just can, but must - that it is essential that we should have a debate, before making such a fundamental change to the definition of marriage in our country."

The motion reaffirmed what had been reaffirmed at the 2015 Synod - ' that marriage, as a gift from God who made us male and female, is the union of a man and a woman to the exclusion of all others, voluntarily entered into for life.'

"Tonight, we get to begin that conversation in our own synod. It is my confident hope that we will model in our own debate the kind of respectful engagement - with the issues and with people - that we want the rest of Australia to practice."

Bishop Stead cited a survey that said the majority of Sydney Anglicans were opposed to same-sex marriage with only about 8 percent wanting to see it practised in churches.

But, he said, many Anglicans were reluctant to engage in the debate because they didn't know what to say.

"As a result of the survey, the Task Force was convinced of the need to provide resources for Sydney Anglicans. The booklet “what has God joined together?” is the first such resource. The booklet aims to engage, equip, and embolden Sydney Anglicans to be a part of the debate on same-sex marriage."

The bishop says the tone of the booklet would be " moderate and reasonable and non-defensive, and not narky or hysterical."

He said it would seek "to present a positive argument that marriage as God designed it is a good thing. It gives – we think – a good way of communicating that message to people who don’t necessarily share our belief in God."

Dean Kanishka Raffel spoke of restrictions in free speech which had followed the introduction of same-sex marriage in some other countries, and local issues such as a push for anti-discrimination laws to apply to religious bodies and the recent anti-discrimination action against a Catholic bishop in Tasmania for producing a booklet on marriage.

"We are respecters of all people, recognising that all people are made in God’s image and loved by the God who hates nothing that he has made." Dean Raffel said. "Love for our neighbours means we earnestly desire that people should know and live in accordance with the truth that sets us free."

The Dean said the booklet would help Anglicans "embrace the opportunities  that our way of government provides for public debate and discussion." 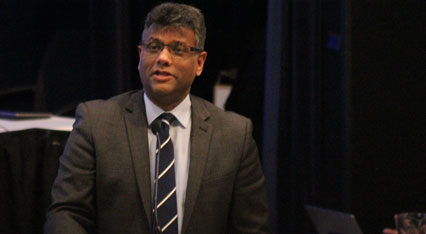 "We zealously defend the right to worship God in Spirit and in truth and to teach what is in accordance with his Word.  We defend the rights of others to do the same in accordance with their conscience - whether they are Muslims, Jews, Sikhs or Atheists.  And we believe that it is not the role of government to regulate such beliefs or to mandate certain beliefs while outlawing others. " the Dean said.

Bishop Stead said although Labour had blocked a plebiscite, there may be 'pressure for “Plebiscite round 2” in (say) September next year. If not, we could still have “plebiscite round three” - a plebiscite on this issue in conjunction with the next federal election, which would take away the ‘cost’ objections to a plebiscite.'

Production of a booklet for Sydney Anglican churches was approved and the motion included encouragement to 'engage lovingly and respectfully in the debate.'

"We must be against all forms of hatred and vilification for all people, especially the LGBTI community." Bishop Stead said. "We don’t (exercise our democratic rights) with any special sense of privilege, as though the church can direct the state. But the converse is not true either -  Christians must not allow themselves to excluded from the public debate simply because we are Christians."

Grace at Work and the Brand Identity