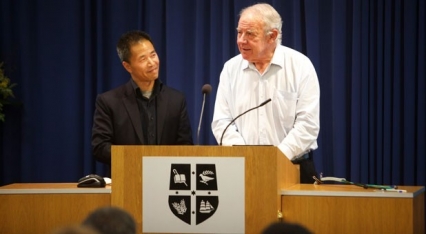 In a double launch at Moore College in June, Phillip Jensen began a new ministry venture and his friends and colleagues launched a book in his honour.

It is no surprise that Two Ways Ministries, named after the internationally successful gospel tract Two Ways to Live that Mr Jensen authored in 1978, has a dual purpose.

“Its aim is to raise up a new generation of gospel-centred preachers through training ministry workers, and to model preaching in churches and conferences, both local and international,” Mr Jensen said.

The former bishop of Wollongong, Al Stewart, is a preaching consultant in the new ministry.

“The general strategy is to keep combining the teaching of God’s word with the preaching of the gospel... and in our Christian community today we keep trying to separate them,” Mr Jensen said at the launch. “So we have evangelists who don’t teach the Bible – who just give warm, friendly, happy stories – and we have Bible teachers who don’t feel any obligation to preach for the salvation of anybody because they’re just explaining the Bible. Keeping these two things together is where we are heading.”

Mr Jensen, who resigned as Dean of Sydney in December, said he now had time for a variety of speaking engagements and has recently addressed conferences in the UK, South Africa and Asia.

The ministry is funded by donations and more than $200,000 has already been raised.

Also at the event, a book titled Let The Word Do The Work was launched to celebrate Mr Jensen’s four decades of ministry as Anglican chaplain at the University of NSW, rector of St Matthias’, and Dean of St Andrew’s Cathedral.

Friends and colleagues from around the world – including Don Carson, R. Kent Hughes, William Taylor, Colin Marshall and Jane Tooher – contributed essays and the book was edited by Peter Bolt.

Launching the book, Canon Phil Colgan said, “Phillip has taught and modelled, and continues to teach and model, that it is the word of God that is powerful to save and change people.... Phillip’s ministry is characterised more than anything by a genuine conviction that it is proclaiming and teaching the word of God that must be at the centre of the work of God. It’s that legacy that this book attempts to capture.”

Let the Word do the Work is published by Matthias Media