A worker at the home compound of Nigerian Archbishop Ben Kwashi has been killed as the incoming GAFCON secretary was confronted by violence on his return from Jerusalem.

Archbishop Kwashi was named as the new secretary of the movement on the last day of the 2018 Global Anglican Future Conference (GAFCON) in June. He replaces Archbishop Peter Jensen, who leaves the post in January 2019. 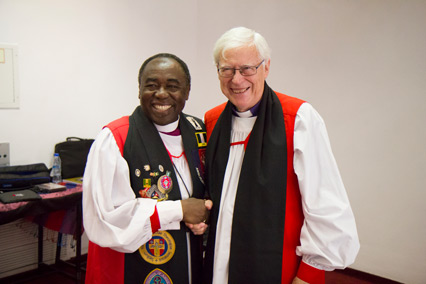 But no sooner had Archbishop Kwashi returned to the city of Jos than his home was attacked. His neighbour, Adamu Dung, went outside to investigate a disturbance and was shot for flashing a torch at the thieves who stole 11 of the archbishop’s herd of cattle.

Archbishop Kwashi lives in a compound where he and his wife care for 54 orphans in their home and hundreds more in a feeding program. The archbishop paid tribute to Mr Dung: “He had a wife and children, living in an uncompleted house of his own. The doors and windows waiting to be bought to be fixed. He had hopes of finishing his house and living peacefully with his family.

“He is no threat – [just] an ordinary citizen struggling with life and doing every honest job to make ends meet. When I saw the widow and the house I could not help myself, my tears flowed freely and my heart shattered.” The killing was part of wider attacks on Christian villagers in Nigeria’s Plateau State, in which more than 200 people have been killed.

Later, at a church service, Archbishop Kwashi told the congregation that persecution would not stop Christian work in the area. “They do kill some of us, but those who are alive just continue and, like I've always said, we will not wait for persecution to stop before we preach the gospel,” he says. “We just keep preaching. If we die, we die preaching. If we live, we continue the job. So, we are in a very good business that killing cannot stop, money cannot buy and nothing can stop.”

The archbishop is about to shoulder more responsibility in the GAFCON movement, with which he has been involved since it began in 2008. He will overlap with the outgoing secretary Dr Peter Jensen, who was one of the prime movers behind the first conference in Jerusalem. 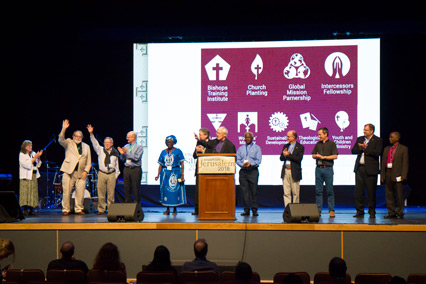 Dr Jensen was recognised with a thunderous standing ovation on the final day of the conference. One of his final public duties was to announce the formation of number of networks including church planting, evangelism, youth work and development.

The other leadership announcement was that in April 2019, at the beginning of the next Primates’ Council meeting, Archbishop Foley Beach will officially take over as chairman of GAFCON. Archbishop Beach succeeds Archbishop Nicholas Okoh, Primate of all Nigeria, who will retire next year.

The Primates’ Council includes the leaders of provinces that comprise the majority of the Anglican Communion, all of whom brought delegations to the Jerusalem conference. Archbishop Beach said the announcement on networks made by Dr Jensen was crucial. “Hopefully through the networks and through the leadership that's been raised up, we will be effective at not just having an exciting event for an occasion but ….. we'll be doing the work day by day, hour by hour in our provinces.”

Archbishop Kwashi echoed his colleagues’ enthusiasm: “The clarity that the Primates’ Council is giving to the church is a big gift to the church – not only Anglican but worldwide,” he says. I think that the conference is gathering momentum, not because of its numbers, but because of the Spirit of the Lord… and the consistency of putting the Bible at the centre.” 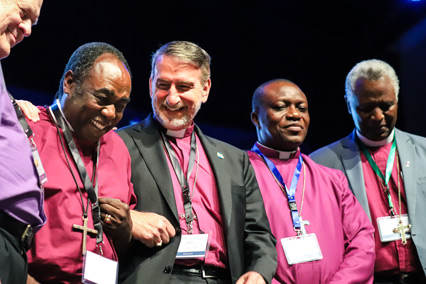 Archbishop Beach says the next nine months will be a time of transition.

“Archbishop Kwashi begins his role in January and I begin at the primates’ meeting in April. So we'll use this time to plan and figure out exactly what our roles are going to entail. Because both of us have busy jobs as well. The ministries we have are very important, but we know that God is leading and we're going to trust in Him to provide all we need to accomplish the task.”