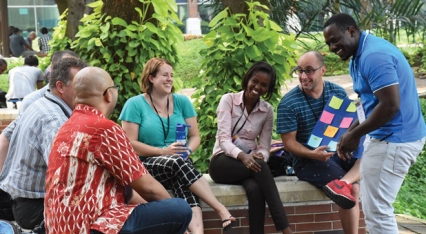 In August, I travelled to Jakarta to serve as one of the mentors to 1000 younger leaders from over 150 countries who attended the Lausanne Younger Leaders Gathering (YLG 2016).

The Lausanne Movement began in 1974 when Billy Graham called together evangelical leaders from around the globe for the first International Congress on World Evangelisation. It met in Lausanne, Switzerland, from where its name developed, and has continued to be a significant catalyst for connecting today’s influencers for global mission with a four-fold vision: the gospel for every person; an evangelical church for every people; Christ-like leaders for every church; and kingdom impact in every sphere of society.

Two Lausanne congresses followed in Manila (1989) and Cape Town (2010), which have fostered significant global partnerships such as those among mission agencies and Bible translators. Regional directors covering 12 geographical regions around the world were established, as were more than 30 issue networks seeking to advance the gospel among oral learners, in diaspora communities, in the world of ideas and in every sphere of society including the marketplace, the academy and the public square.

Apart from significant consultations over the years and the publication of Occasional Lausanne Papers, there has been a strong commitment to cultivating and strengthening the next generation of Christian leaders. YLG 2016 was the third such gathering connecting evangelical leaders between the ages of 25-35 who are already impacting their region with mature leaders from around the world, to build up the next generation of influencers.

For every five participants, there was a mentor who met with their “connect” group on a daily basis for 1.5 hours. I was one among half a dozen Australians who were privileged to be mentors to these blossoming leaders. The first part of each day was spent in a plenary session where the Bible was central, with opportunity for Scripture engagement at a personal and connect group level. The content was then explained by a gifted speaker and application questions were explored again in the connect groups.

With the general theme of “United in the great story”, a theological theme of God’s people in God’s story from Genesis to Revelation was unfolded. Dave Benson, a lecturer at Malyon Theological College in Brisbane, was responsible for the program and Richard Chin, the National Director of the Australian Fellowship of Evangelical Students (AFES), was one of the speakers who delivered two excellent Bible studies.

Participants were encouraged to plot their own storyline to reflect on God’s hand upon their own lives and where God might be leading them. As each participant explained their story to their connect group, opportunities were created for listening, exploring, encouragement and advice within the group under the guidance of the mentor. Some wonderful stories unfolded. I had the privilege of having two women – one from India and one from Nigeria – and three men (from China, Germany and Syria) in my group.

Afternoon sessions provided opportunities for gathering by geographic region and attending issue-specific workshops or lab sessions with global leaders. The evening plenary sessions were given to mission in the 21st century with speakers such as Os Guinness, Ravi Zacharias, Becky Pippert and David Platt. Among many highlights were the presentation by two Chinese pastors of house churches and an Iranian woman whose suffering for her faith in solitary confinement was a challenge to us all.

The success of the YLG 2016 was in many ways the opportunity for connection. The young Indian woman in my group had a dream to recover young girls from prostitution in her home city and establish an orphanage. I was able to connect her with another Indian woman who was also present and is working to recover girls from the slave trade in India. The young man from China has established an organisation to assist returning Chinese students who have become Christians while overseas but have difficulty finding a church upon their return. Participants were also encouraged to make connections with individual mentors for a one-to-one session. My own experience of these sessions was exhilarating, as I saw God at work in the lives of Brazilians, New Zealanders and Iranians, apart from my own connect group participants.

The development of young leaders, indeed the reaching of each new generation for Christ, is an imperative for us all. YLG 2016 was not just an event – it has spawned a new age of mentoring across the globe, with the vast majority of participants seeking longer-term mentors over the next five years. I have no doubt we shall see many of those who participated in YLG 2016 taking their place in global leadership in the future and making their impact for the kingdom of Christ.