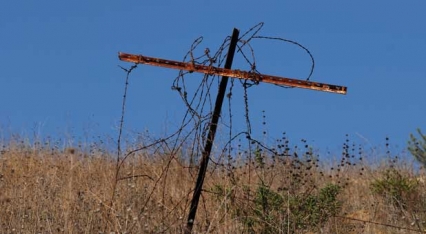 Perhaps no other statement from the New Testament characterises the path of discipleship more clearly than the words of Jesus recorded in Luke 9:23.

Whoever wants to be my disciple must deny themselves and take up their cross daily and follow me.

The image of carrying a cross was a gruesome portrayal of a “dead person walking”, as it was the Roman custom, for those found guilty of a crime deserving death, that they should carry their own cross to the place of execution. Along the way they would suffer the humiliation of bystanders who came to witness the guilty person’s walk of shame carrying their own instrument of torture and death. Crucifixion was a shameful, public death.

For Jesus, of course, this very scene is played out in the Gospel narratives as he bears his own cross (until physical exhaustion prevented him carrying it further) to Golgotha, the place of crucifixion in the public sphere. Furthermore, the cross of wood signified not only death, but also curse—the curse of God, as the apostle Paul explains in Galatians 3:13, citing Deuteronomy 21:23.

Christ redeemed us from the curse of the law by becoming a curse for us, for it is written: "Cursed is everyone who is hung on a tree." Yet Jesus uses this startling image to characterise his disciples. Moreover, it was to be a daily experience to take up one’s cross. For the cross speaks of death in its most profound sense, identity with Jesus’ death in his substitutionary, sin-bearing and curse-removal death, and thereby death to self.

I have been crucified with Christ. It is no longer I who live, but Christ who lives in me. And the life I now live in the flesh I live by faith in the Son of God, who loved me and gave himself for me. (Galatians 2:20)

The cross is central to Christianity, as the death of Jesus is central to the matrix of salvation encompassing the life, death and resurrection of Jesus. However, the cross is also central to our way of living, as it speaks of sacrifice and self-denial, or as Paul says: “those who belong to Christ Jesus have crucified the flesh with its passions and desires” (Galatians 5:24).

The cross, therefore, has been a Christian symbol for nearly two thousand years. For Protestants it is not the crucifix, depicting a tortured image of Jesus, but an empty cross (like an empty tomb) depicting victory over death.

Thus a simple cross will adorn the grave of a Christian, a reminder that death has been defeated because Jesus has died the death that we deserve so the victory of his resurrection belongs to us. Of course, the imagery of death is sometimes obscured by ornate crosses of gold and sliver, whereas an instrument of death is never pretty.

There is something very powerful in a wooden cross, with jagged edges reminding us of the curse of death. Some readers may remember the two nails (reportedly from the ruins of Coventry Cathedral) forming the image of a cross that used to hang in the chapel at Gilbulla, graphically reminding us of the curse of death. Yet for others, the cross is the cause of offence (Galatians 5:11).

Since 2014, thousands of church crosses in China have been removed as part of the Chinese government’s bid to regulate, if not eradicate, Christianity in the country. Since the government launched its campaign against crosses two years ago to regulate religious establishments, two thousand crosses have already been taken down in the coastal province of Zhejiang. Several members of the public have since been arrested for attempting to halt the government's crude attempt to suppress the Christian faith.

In the Oak Church of England School in Huddersfield the offence was clearly too much for the governors of the school when they amalgamated three schools into one, but chose to remove the cross from the school’s logo. This decision was approved by the Diocese of Leeds who oversees the running of the school. While such a decision may appear minor, it clearly was seen as such by a large contingent of parents at the school.

Symbols, of course, are not reality. However, they testify to a reality. We should never be ashamed of the cross, nor should we ashamed of carrying our cross daily in the public sphere.

Lift high the cross, the love of Christ proclaim

till all the world adore his sacred Name.