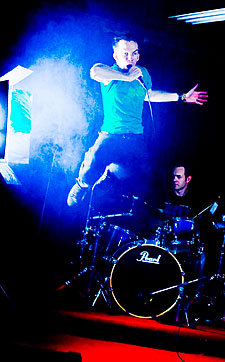 Christian band Qurious' latest single, ‘The Good Life’, is the basis for the new resource from the Connect09 team: a ‘Scripture seminar in a box’.

The seminar " captured in a DVD which comes with a leaders’ booklet " has been produced by Connect09 in partnership with Qurious.

It will be released next month as a resource to purchase for SRE teachers and school teachers who teach Scripture classes or run International Christian Fellowship or Crusader groups, as well as youth leaders and groups.

"The focus is very much about Scripture seminars " that's what we've designed the format and material for, but it can certainly be adapted easily to a youth group of 15 kids or 500," explains Connect09's youth coordinator, Dave Parker.

The DVD challenges students to consider their view of "the good life' now and for their future, featuring a talk on the biblical perspective given by bass guitarist and St Stephen's, Willoughby's youth minister Steve Morrison.

Also featured are discussion questions, and vox pops guaging Sydneysiders’ perspectives on what is most important in life.

World champion windsurfer Alison Shreeve and teenager Bridget give their own perspectives on the ‘good life’ with Jesus at the centre.

Mr Parker is encouraging teachers and leaders to tailor the DVD to their own confidence levels and the needs of their groups, running the whole presentation as a seminar, or taking sections from it as desired.

In fact, Connect09 and Qurious are hoping the DVD will be used by schools who have never run Scripture seminars before.

Their goal is to reach 50 such schools by the end of the year " already 40 schools in this category are on board with the DVD seminar, while 140 schools who have already run Scripture in the past are preparing to use the DVD resource.

The Colin Buchanan DVD giveaway has been a great success, with thousands of children taking them home to watch.

Why has Connect09 not used a giveaway for youth?

"We wanted to provide a resource to people to do ongoing ministry, to equip people to be able to do the work within the schools or youth groups," Mr Parker says in reply.

"To do something that would engage youth, for them to go home and put it their DVD player and actually watch it, would be a massive understaking."

Instead, Mr Parker "Â who also works for EMI Music " is encouraging schools to hand out copies of the glossy gospel of Mark, produced by Connect09 with youth in mind, and CD single of ‘The Good Life', the song featured in the seminar.

"They're the things that would connect better with youth: after they've heard the message, they then take home a book that the talk was based around; to be able to take home some of the music is also really good for youth as well," he says.

The DVD seminar Is the brainchild of Qurious, a four-man band headed up by schoolteacher and SRE teacher Matt Mulready, with youth minister Steve Morrison on bass.

Before Connect09 began, Qurious were considering creating this resource, says Mr Parker, timing that turned out to be beneficial for both parties.

"Qurious said "hey we're thinking of creating this resource but we need a hand doing it', and Connect09 said "great, we could actually really make the most of that resource and really help promote it and get it out there so, why don't we partner together and make it happen?'" Mr Parker says.
He enthusiastic about working with Qurious on this Connect09 project.

"The guys are experienced and enthusiastic and really committed to the ministry, and on top of that, their music engages: it's active, it's punchy, it has a great message and good music and when you package all those things together, that's what will connect with youth," Mr Parker says.

Connect09 have also joined with Qurious to give the band momentum for future projects which they will hopefully be able to produce on their own.

"It's all about equipping people to do long-term stuff, getting resources out there so that by the time we've got this first one out, when Qurious then roll out the second one people go, "oh I know the first one, it worked really well, it had a really good push from the Diocese, therefore we're going to trust the second one, and then hopefully the third and fouth one will go on from there as well," Mr Parker explains.