They're both leaders, both catholic, and they were on their best behaviour talking to Christian leaders in Sydney, both promising to maintain religious freedom.

Barry O'Farrell and Kristina Keneally only came face to face briefly on Tuesday night, as the Premier left and the Liberal leader arrived for 'Make It Count 2011'.

But they were united in one thing.

Neither said they had any plans to change religious freedom protections for Christian organisations and church schools under current anti-discrimination law.

The Australian Christian Lobby organised the event, according to ACL boss Jim Wallace, on behalf of churches to 'facilitate engagement with politics'.

Both leaders made initial statements and then took questions from denominational leaders., but they were not in the same room at the same time.

Also in a departure from the format used in ACL's Federal politics debate, the event was not webcast but the video will be available on the ACL website.

Premier Keneally joked about her degree in systematic theology, saying she could say with certainty she was the only Premier of New South Wales to hold such a qualification.

The Premier went on to detail the issues where she had to reconcile her faith with political decisions.

She spoke of the introduction of ethics classes, which she considered didn't weaken the position of SRE.

The decision to vote to allow same-sex couples to adopt was harder, she said, but she had followed her conscience.

Likewise, she said supporting the Kings Cross injecting room was the right decision.

Photo: Premier Keneally speaks to Bishop Tasker before the debate

The Liberal leader also declared Roman Catholic faith, but said he thought his faith was separate to his job as a Parliamentarian.

He said he represented people of all faiths in his electorate, and those with no faith.

Mr O'Farrell  said he would listen to public advice from church leaders such as Archbishop Jensen and Cardinal Pell "and unlike the former labour premier I acknowledge their right to do so".

"But I won't promise them an inside running into public policy just because we share similar religious views."

On contentious issues of  importance to Christian churches, the Coaltition leader pointed to the Liberal Party's strong tradititon of putting such matters to conscience votes.

Questions from the floor

Both leaders said they had no plans to remove exemptions from the anti-discrimination act for church agencies and schools.

Premier Keneally would not commit to reviewing the operation of legislation for the ethics classes in 12 months time.

Barry O'Farrell declined to promise overturning the legislation in the upper house if he won government, because he said his party was unlikely to control the upper house.

However he said control of the upper house by the greens would be his 'second worst nightmare'. 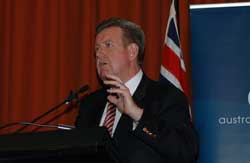 Neither party had any intention to decriminalise abortion.

The Liberal leader would not pledge to take up productivity commission recommendations on gambling including a pre-commitment scheme to limit gambling.

He said he was in favour of 'volountary' pre-commitment.

The March edition of Southern Cross will feature extensive pre-election coverage, including more on the leader's debate.

Video of the statements will be posted ACL’s site, NSWvotes.org.au

Do we need parenting ministry?