With his 14 years of faithful service to the Anglican Church coming to an abrupt end, Mark Hadley is praying he won't be joining the unemployment queues in September.

"God has new plans for me and, as usual, they centre on taking me out of my comfort zone," says Mr Hadley, who oversees the Diocese's New Media operations including numerous internet sites and video productions.

Anglican Media has been forced to retrench Mr Hadley and two other senior staff, while three full-time positions will be made part-time, in the latest round of job cuts caused by the Diocese's financial losses. 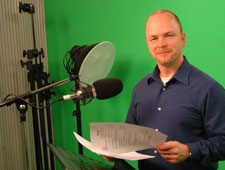 Although more than half of Anglican Media's operations are funded by advertising and video sales, a downturn in positions vacant advertising meant the cutbacks had to be brought forward.

Anglican Media expects to have its $577,000 grant cut significantly when Synod meets in October. As a result, it will scale back its existing internet operations.

Mr Hadley has written and directed a host of Christian TV programs, as well as overseen the development of sydneyanglicans.net, christianity.net, connect09.com, and websites for GAFCON.

He says his family are trusting that ‘this is the recession we had to have'.

"God clearly intends to show us just how much he can be relied on."

Along with Mr Hadley, Anglican Media’s news editor position will also be made redundant.

Natasha Percy, who has performed this role for the past two and a half years, will leave Anglican Media mid-August to take on the role of managing editor of Christian Education Publications (CEP) at the end of August.

However the news editor role will continue to be filled in a part-time capacity until Christmas.

This means Anglican Media’s editorial staff will have been cut by 75 percent by the end of the year. However, management is looking at partnerships with outside organisations to ensure the scope and quality of SC is not overly compromised.

In his time with Anglican Media, Mr Hadley guided the Diocese's transition from old-style analog formats to the new media frontiers.

After a career with ABC Radio and Prime TV in Wollongong, Mr Hadley was employed in August 1995 as the Diocese's director of media evangelism overseeing TV and radio production for the secular airwaves.

"When I started we cut sound bites together " with real razor blades!

"Methods may shift, but the message hasn't changed. The success of our productions like The Christ Files and The Life of Jesus show that if we pay attention to how people listen, we can still tell them what they need to hear."

Kyle, Jackie O and the smell of hell