As the Year 13 Youthworks Gap Year program prepares for its sixth intake of students, the Rev Andrew Nixon - the incoming Year 13 Director - has discovered that the program is not only impacting school leavers but their families as well.

Mary Hannah had initial reservations about her daughter Christen enrolling in the Year 13 program last year.

"When Christen told me she wanted to do Year 13, I was pretty unsure about the program", said Mrs Hannah.

"I wasn't sure she should take a gap year and if she did, why wouldn't she want to work and then go to Europe like her other friends?"

With Christen remaining unmoved by her mother's worries, Mrs Hannah decided she would support her daughter's decision. It wasn't long before she was so impressed by her daughter's "organisation, drive and commitment to the program" that she herself was greatly impacted.

"Just before Christen went to Fiji her commitment and knowledge of Christianity and the commitment and love of her Year 13 friends inspired me to re-examine my own beliefs and I became a fully committed Christian", says Mrs Hannah. 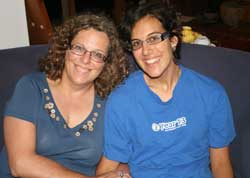 Mary Hannah is not the only parent who has been inspired by the Year 13 Gap Year program. Over the past few years, parents of Year 13 graduates have generously donated to future programs so that financially disadvantaged students may have the same opportunity their child had.

"Aside from our students, parents have become some of Year 13's biggest advocates", says Rev Andrew Nixon. "We find that Year 13 parents begin each year with a range of emotions and yet after watching their son or daughter grow and mature, most end the year with thankfulness and a reassurance that Year 13 was definitely worth it."

With his experience in directing the Connect 09 campaign and KCC's Engage conferences, Mr Nixon brings to his new role a passion for seeing young adults grow in maturity, and an excitement about the possibilities the growing gap year trend after high school presents for discipling Christian school leavers.

For this niche group, Mr Nixon truly believes that Youthworks' Year 13 Gap Year is "second to none".

"There is everything from financial management to first aid; from theology to teamwork; from mentoring to mission. It is all about preparing to follow Jesus wherever life leads. And it really delivers. Don’t take my word for it - speak to a graduate" or a parent!"

And Mrs Hannah certainly agrees: "I am inspired and impressed with the Year 13 program and can't thank them enough for the growth and commitment they have given to Christen. If you are worried about your child doing Year 13, just stop and let them go and grow!"

When ‘thinking of you’ is not enough