Read the proposal in pdf 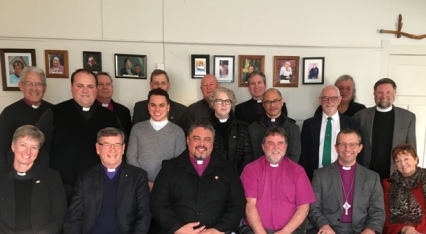 Archbishop Glenn Davies has addressed some of the leaders of the Anglican Church in Aotearoa, New Zealand and Polynesia (ACANZP), proposing ‘Distinctive Co-existence’ as a solution to the issues facing the Church after their Synod’s decision to allow the blessings of same gender relationships.

In May, the three Tikanga, or cultural streams, of the Province - Pakeha (New Zealanders of European descent), Maori and Pasifika (Polynesian) - voted that there should be no change to ‘the Church’s teaching on the nature of marriage [which] is to affirm marriage as between a man and a woman’.

However, following the recommendations of ‘Report on Motion 29 Working Group’ to amend the canons of ACANZP, the General Synod passed Motion 7, which authorised diocesan bishops to allow clergy in their diocese to bless same gender relationships in ‘a non-formulary service’. According to the amended canon, no member of the clergy can face disciplinary action either for agreeing to bless such relationships, or for refusing to do so.

The Diocese of Polynesia will not implement this accommodation as its members oppose the blessing of same-sex relationships and Pacific Island countries such as Samoa, Tonga and Fiji do not recognise same-sex unions. However, Tikanga Pasifika did not block the resolution for Tikanga Maori and Tikanga Pakeha.

Shortly after the vote, the Standing Committee of the Diocese of Sydney passed a resolution, noting ‘with deep regret that this step is contrary to the teaching of Christ (Matt 19:1-12) and is contrary to Resolution I.10 of the 1998 Lambeth Conference.’

I come to you with a proposal for a new way forward for Anglicans in New Zealand which, if accepted, could well become a model for other Anglican Provinces...

Dr Davies was invited to New Zealand by all three Primates to discuss the issue and allow him to learn more of the history of the debate in ACANZP over several decades, to hear from key representatives of the Church and to speak in response to these representatives on Thursday, August 23. Dr Davies was accorded a warm welcome from Archbishop Philip and Archbishop Don (though Archbishop Winston was unable to attend), and received a solemn and gracious welcome from the local Maori congregation on their marae. “This warm welcome fostered respectful dialogue and the exchange of ideas, despite the differences of opinion present. Although not a time for decisions, the meeting was a fruitful time of conversation, face to face, which enhanced the relationships among us.” he commented.

In response to this time of listening, Dr Davies said, “I respect the process of your General Synod’s actions, notwithstanding that a significant minority of your Church members consider this has been the wrong decision.”

“I recognise that we are past the point where I could expect you to change your mind or that I could ask you to step back from the decision to which you have come. For this reason, I come to you with a proposal for a new way forward for Anglicans in New Zealand which, if accepted, could well become a model for other Anglican Provinces, avoiding the querulous controversies that have beset our Anglican brothers and sisters in North America and, more recently, in Scotland.”

In his proposal document, Dr Davies said, “The difficulty of the present hour is that those who oppose the legitimising of same-sex relationships see the question not as a matter of order, but as a matter of gospel. The adoption of such a departure from Christ’s teaching (as they see it) makes it impossible for them to continue in communion with those who advocate the new teaching. At the same time, those who advocate for the legitimising of same-sex relationships as a matter of justice and non-discrimination see the exclusion of same-sex couples as lacking the love which should characterise disciples of Christ. Indeed, some claim that for them also, this is a gospel issue and they cannot understand why anyone would suggest otherwise. The heightened and emotionally charged debate has caused havoc in our Communion, which in my view has brought dishonour to Christ. However, peaceful co-existence seems illusory.”

The essence of the Archbishop’s proposal was what he called ‘Distinctive Co-existence’, modelled on the jurisdiction of Anglican Churches in continental Europe.

“It is interesting that within Europe there are two overlapping Anglican Churches: the Diocese of Gibraltar in Europe under the jurisdiction of the Archbishop of Canterbury and the Convocation of Episcopal Churches in Europe under the jurisdiction of the Presiding Bishop of The Episcopal Church (TEC).  Each has differing constitutions and canons, yet they share the same Anglican heritage. Could not the model of continental Europe provide a new way forward for Aotearoa and Polynesia?”

Aotearoa and Polynesia could lead the way in expressing generosity of Spirit to those who find themselves unable to accommodate the new consensus...

Dr Davies said the model would require changes and possibly a recasting of the Lambeth Conference of 2020. But he said it was needed to accommodate churches and disenfranchised Anglicans in New Zealand.

“The dissenting churches from Christchurch and elsewhere cannot in good conscience remain in ACANZP, despite the gracious offer of alternative oversight from Polynesian bishops. The problem is that these brothers and sisters cannot continue to be a part of a Church which in their understanding has changed its Canons to allow the blessing of same-sex couples living in sinful relationships. Yet these brothers and sisters are still Anglican, and recognised as such by most Anglicans around the world.”

Archbishop Davies said it was important that the mistakes in North America be avoided in the South Pacific.

“North America saw the defrocking of priests and the confiscation of property, even diocesan property where a diocesan synod had agreed to disaffiliate with TEC. This merely demonstrates power and greed, not gospel partnership. The Anglican Church in North America (ACNA) is now one of the fastest growing denominations in the USA, whereas TEC is declining in numbers.”

He said if the proposal were to be adopted, “Aotearoa and Polynesia could lead the way in expressing generosity of Spirit to those who find themselves unable to accommodate the new consensus. This would be a model not only for other provinces but for the Anglican Communion as a whole.”