Burundi Dave, as Dave Nduwimana is known at St Matthew’s Manly, has become a fixture in the church after just a few short years.

Dave, as his nickname implies, arrived from Burundi as a refugee in 2013 and  was taken in by St Matt's, living with two different church families over a period of 4 years.

His gifts as a musician and singer were soon recognised and he became the Music Director for the church. His Christian gifts have been a blessing to the Katoomba Convention ministries, as he has led the music at the Men’s convention and Easter Convention.

As well, he has worked with Anglican Youthworks to translate ministry resources into the Kirundi language to send back to Burundi. He obtained his permanent residency in September 2020 and around that time received rave reviews when he was invited to sing the Australian National Anthem at a Bledisloe Cup final game in Sydney.

But a greater honour was to come, as he was chosen to sing at the 2023 National Australia Day Live concert on the steps of the Sydney Opera House.

On the same day, friends from Manly Church witnessed him taking the pledge and becoming an Australian citizen. 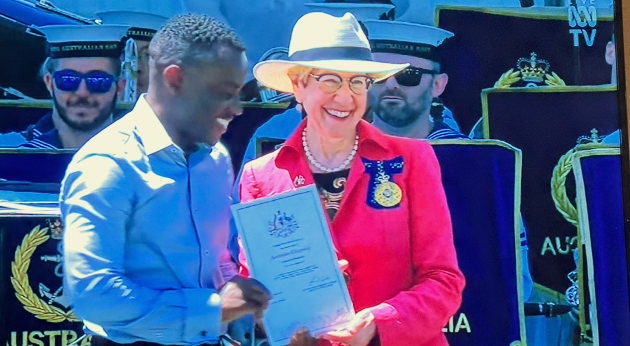 Above: Dave Nduwimana recieves his citizenship from the Governor of New South Wales. Main Photo: Dave sings the National Anthem

Aussie Dave performed the National anthem at the end of the concert after a brief interview during which he thanked the members of St Matts for his welcome to Australia and expressed his joy at becoming a citizen and the freedom Australians enjoy.

After the anthem, he joined the other concert performers in singing ‘I am Australian’, for the first time as an Australian citizen.

1.
Children’s ministry from Manly to the Top End
2.
Push for a crackdown on modern slavery
3.
From the cockpit of a Globemaster transport plane to becoming an Anglican Chaplain
4.
Archbishop Writes | Australia Remains Open to Christianity

Is the Reformation still relevant?