Pastor Ed Shaw doesn’t like to describe himself as a “gay Christian”.

We talk about experiencing same-sex attraction because it just includes more people, and includes us.”

Ed Shaw is pastor of Emmanuel City Centre Church in Bristol, England and is heading to Australia for a series of talks sharing his experiences in dealing with issues of same-sex attraction and church responses.

He is one of the founders of Living Out, which is a community of Christians who experience same-sex attraction and bring out into the open the questions and dilemmas they often face. The group stands for a biblical position on sexuality which Mr Shaw says is clear.

The group stands for a biblical position on sexuality

The Bible is consistent throughout

“I think what I find so convincing about what the Bible says about sexuality, sex and marriage and homosexuality, is that there's a consistent line all the way through, right from Genesis all the way through to Revelation,” he says. “This is a really clear stress on the fact that marriage is for life, that marriage is for a man and a woman and that sex is just for marriage. It shouldn't happen outside.”

As well as visiting some local churches, he will be speaking at a series of events organised by Liberty Christian Ministries, a group which works among same-sex attracted Christians.

On Tuesday, August 20, Mr Shaw will be the keynote speaker at a ministry conference with the theme “Creating a biblically inclusive church”. The following day, in conjunction with the Centre for Christian Living, he will speak on the topic “Why we need Jesus' help with our sexualities”. This is aimed at all parishioners and will support the principles discussed during the Tuesday conference.

The final event of the week, on August 23, is for young adults and youth and is titled “Jesus is great news for a rainbow world!” To be held at St Paul's, Carlingford, it will seek to encourage young Christians to have confidence in the Bible's teaching on matters of sexuality and godliness.

"Jesus is great news for a rainbow world"

Mr Shaw will draw on the principles outlined in his book The Plausibility Problem: The Church and Same-Sex Attraction. He argues that Christians have a problem when it comes to people who experience same-sex attraction and churches need to offer plausible alternative to the message society gives us about homosexuality. 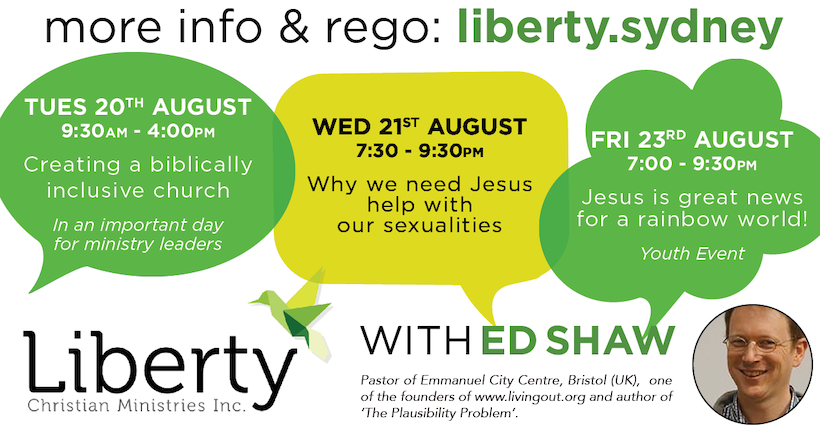 The issue, he says, is that Christians have have not fully understood and embraced what Christ offers to those who are same-sex attracted. “Throughout human history up until very recently, no Christians have ever taken any different line on the Bible [on matters of sexuality]. And the only reason I can see for people to change their mind is what's happening in society around us, not what the Bible says.

There is more to sex than deeper relationships

Despite the headline dominating debates over homosexuality in which churches are so often condmened, Mr Shaw see an opportunity in the current focus on sexuality, gender and identity.

“God is being good to us by making us think hard about these issues,” he says. “We have lost contact with a lot of what the Bible teaches about each of those areas; and all the cultural changes are making us really think and rearticulate biblical truths which we have rather ignored and not particularly embraced."

Key events in Mr Shaw’s visit will be live streamed. For details see the Liberty Website

Sharing Jesus during the month of Ramadan