The General Synod of the Anglican Church of Australia has condemned domestic and family violence in all its forms, saying churches are committed to being safe places for all people, especially children and vulnerable adults.

In a motion moved by Melbourne’s Bishop Stephen Hale and seconded by Sydney’s Archdeacon Kara Hartley, Synod described domestic violence as sin, saying Scripture should never be twisted to justify or excuse any abuse.

The motion said “No victim of domestic abuse should ever be pressured to forgive, submit to, or restore a relationship with an offender.”

General Synod affirmed that churches should ‘work to protect those experiencing domestic abuse as a first priority’.

The speeches made it clear that domestic violence encompassed not only physical but also psychological abuse such as denigration, controlling and isolating behaviour.

In her seconding speech, Archdeacon Hartley, the Archdeacon for Women in Sydney, spoke passionately about the effects of domestic violence, saying it was "a problem in our country and it’s a problem in our church. One case is a case too many. For some in this room, this very debate may be a very painful discussion on a personal level."

"Domestic Violence, in the context of marriage, is characterised by the perpetrator’s determination to exert inappropriate power and control over a spouse or partner." the Archdeacon said. "It’s a pattern of behaviour that shapes the relationship. Of course, it then extends to the wider family, affecting children and others. Our motion today affirms the realities of human dignity, God’s condemnation of violence and the misuse of power and control over others."

"As the Primate said in his address, there is no biblical teaching which endorses violence in marriage. There is no biblical teaching for example which says a wife has simply to endure such violence. The biblical principle of marriage is self-sacrificial love. In passages like Ephesians 5, a husband is called to love his wife as Christ loved the church, giving himself up for her. There simply is no demand to slave like servility of a wife to her husband. It is a misuse or twisting of scripture for a husband justify this evil behaviour from the Bible. "

"This is a moment where we as a national church can affirm our commitment to care and support victims of domestic violence in our churches, calling perpetrators to repent, and making churches safe places for all people." Archdeacon Hartley told the Synod.

The motion read “We grieve with victims and survivors of domestic abuse, and pray for their healing and recovery. We give thanks for those women and men, clergy and lay people, who have faithfully supported, cared for and protected such victims in our churches and communities. However, we also confess with deep shame that domestic abuse has occurred among those who attend our churches, and even among some in leadership. We apologise for those times our teaching and pastoral care has failed adequately to support victims and call perpetrators to account. We urge Anglican dioceses around Australia to ensure they have policies and good practice guidelines in place, along with education and training, for responding well to situations involving domestic violence within our parishes and organisations.” 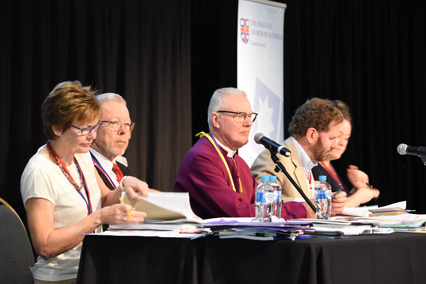 After the initial motion, the Synod also voted to consider studying the prevalence of family violence inside the church.

The General Synod requested its Standing Committee to look at professionally designed and independent research into the nature and extent of family violence among Anglicans. Other churches may be invited to join the research.

University of Western Australia lecturer Dr Renae Barker said a recent ABC series on violence inside the church relied on outdated overseas research with little relevance to Australia. It was important to have proper evidence to set against these claims, she said.