The Reverend Canon Boak Jobbins, OAM, a former Dean of Sydney, has died at the age of 65.

Canon Jobbins died suddenly at his home in Sydney on the morning of 1st September. He is believed to have suffered a heart attack.

He had been Rector of St Mark's, Darling Point since 2002.

An author of commentaries and co-author of 'Introduction to the Bible' textbook for the Moore College Correspondence Course, Canon Jobbins was ordained in 1972. 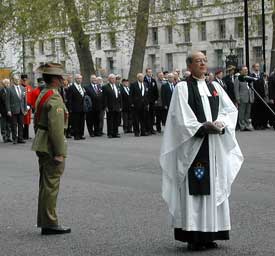 Photo: Canon Jobbins at a military ceremony in London

For ten years until 2002 Canon Jobbins exercised a wide ministry as Dean of Sydney and played a major role in the restoration of the cathedral.

He then served as Rector of Darling Point from 2002 and an was made an honorary Canon of St Andrew's Cathedral.

Canon Jobbins was awarded the Medal of the Order of Australia in 2003 for service to religion, particularly through the diocese of Sydney, and to the community.

He is survived by his wife Di and children Lachlan, Ben and Sarah.

Archbishop Peter Jensen has paid tribute, saying "We are shocked and grieved at Boak's sudden death. He was an outstanding pastor, a memorable preacher and a courageous witness to the truth of the gospel. We express our deep sympathy to Di and her family as well as our gratitude to God for the fruitful life of his servant."

The funeral will be held on Thursday 6 September at 10.30am at St Mark's, Darling Point.

The Power of a Dependent Father