God at work in Zimbabwe 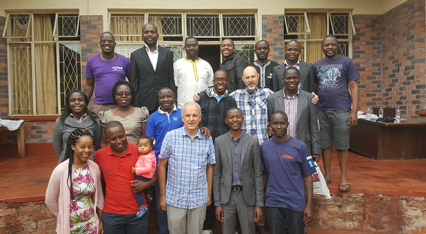 Imagine the outcry from Australian consumers if the price of groceries doubled in a fortnight, or if banks wouldn’t give customers their own money.

It might sound far-fetched but this is everyday life in Zimbabwe, where Robert Mugabe ruled with an iron fist for 37 years, almost three-quarters of the population lives below the poverty line and public debt stands at 82 percent of annual GDP.

“People learn about Zimbabwe’s economy at university, but for us it’s not an example in a textbook – it is the life we live,” he says. “You have to cross the border to buy things because supermarkets start holding on to goods, ATMs stop giving cash, and pastors who might have come to our conference suddenly can’t afford it.

“But despite these challenges, the most urgent need for Zimbabwe (and indeed for Australia) is the momentous news of the gospel, and by God’s grace this unstoppable gospel will be heard across all Zimbabwe!”

Later this month the rector of Maroubra, the Rev Jim Crosweller, will return to Zimbabwe with Mr Masango, Maroubra parishioner Michael Neilsen and former CMS missionary in Africa, Joe Radkovic, for the third annual pastors conference – which focuses on helping local pastors preach the gospel from the whole Bible.

The conference is organised and run by the Australian branch of The Gospel Coalition of Zimbabwe (TGCZ), a group which began out of the desire to support the growth of the nation’s evangelical ministry.

It’s one of many organisations and individuals in Australia keen to grow a healthy gospel ecosystem in the country, from the national student ministry that Mr Masango will be working for out into churches and theological colleges.But it’s a challenge on more than one front: the prosperity gospel is rife, pastors are under-trained and university ministry is under-financed.

“God’s doing something in Zimbabwe. People are doing amazing things there with threadbare resources to change the ministry ecosystem of the country."  Mr Crosweller says.

A number of parishes across the Diocese – including Maroubra, Wild Street, Church by the Bridge, St Ives and Norwest – provide an array of ministry support for the work in Zimbabwe. MTS began running in the country last year, the Australian Fellowship of Evangelical Students is involved, and at Moore College a number of students take part in a prayer group for Africa, with members interested in potential future ministry in Zimbabwe.

In addition, Anglican Aid and CMS have provided financial support to Mr Masango and his family during his studies. Anglican Aid runs a community support program as well as a seed project for ministry in Zimbabwe, and CMS has an eye to send long-term missionaries to the country.

“We see Zimbabwe as a strategic place,” says the international director of CMS Australia, the Rev Canon Peter Rodgers. “Our vision in Africa is to equip leaders, particularly in countries where the need is the greatest. Zimbabwe is such a place and we have identified possibilities to place missionaries into Bible teaching and theological education roles. Such workers would also be able to partner with Tawanda in supporting discipleship and training on university campuses.

“We would love to connect with people who share a vision to learn a local language and serve long term in Zimbabwe to build up faithful and committed leaders.”

While there’s a lot to do, there is also much happening under God already and Mr Masango is optimistic about the future.

“God is building this up and they are stewarding it in Zimbabwe – it’s his doing,” he says. “I mean, I never thought we would have 30 pastors together from seven different denominations learning biblical frameworks and theology [as we did last year]! People drink it in the water in Sydney but in Zimbabwe some pastors have no training at all, and it’s so important for them to receive it.

“I want some people to go to Zimbabwe as theological lecturers. I don’t know who God has in mind, but I’ve already been nagging people. We have two theological colleges that are open to people coming. Colleges are undernourished and the staff is threadbare.

“I have said, ‘God, please bring me the people I need on this team’.”

Those interested in ministry updates from The Gospel Coalition of Zimbabwe (Australia) can email tgcz.australia@gmail.com