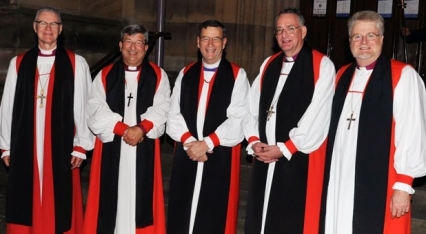 Archbishop Glenn Davies has joined other Anglican leaders in Australia in expressing concern about the numbers of children held in detention.

“As leaders of the Anglican Church of Australia we wish to put on record our profound disquiet that at the end of February this year there were more than 950 children in detention facilities and alternative places of detention in Australia, and a further 177 children in offshore detention in Nauru.  The average time people spend in detention is more than eight months." the statement says.

The Archbishops said they were "not seeking to express a party political opinion on this matter" but were reflecting the fact that "Within our Church there is grave disquiet about the asylum seeker policies of both major parties".

“While our Federal Government has been drawing attention to the number of days without boat arrivals, this is another set of numbers that needs close scrutiny.  These children are innocent victims of tragic circumstances.  To use the words of the UN Charter on the rights of the child, detention of children should be used only as a measure of last resort and for the shortest appropriate time."

The statement, issued to co-incide with Palm Sunday, went on to say “It is our view that those who flee from desperate circumstances by boat should not be punished by prolonged detention whether in Australia, Nauru or Manus Island. They are not the people smugglers. They are people made in the image of God, who deserve respect from all Australians, but especially our Government and its agencies.  They come to Australia out of desperation, fleeing religious, ethnic or economic persecution. They seek asylum under the Refugee Convention that as a nation we have signed. Many will be found to be refugees, as the Government’s own statistics demonstrate."

Dr Davies, along with the Bishop of Tasmania, and the Metropolitans of all states, signed the statement which calls on the Australian Government to "ensure that asylum seekers are treated humanely and respectfully by those charged with their care and protection, and that they are attended to in a timely manner.”

Photo: The Archbishops of Melbourne, Perth, Brisbane and Adelaide at the Inauguration of Archbishop Davies (centre) in August 2013, courtesy Ramon Williams, Worldwide Photos