“If we abandon God’s Word we have nothing to offer the world. That is why this motion is before you tonight,” said the Dean of Sydney Kanishka Raffel as he introduced one of the key motions of the 2019 Synod, one which he said he moved ‘with a heavy heart’.

“My heaviness of heart is because the motion before you addresses not a departure from God’s word in the laws of the land but a departure from God’s word that is being promoted by Bishops and Synods in our Church.” Dean Raffel said. “There is one God and Father of us all, one Lord, one faith, and one baptism - but Bishops and Synods in our church nationally, risk rending the fabric of our fellowship by promoting a theology of marriage that is contrary to Scripture.”

The motion followed the Archbishop’s Presidential Address where he spoke of at least two Dioceses pushing to bless same-sex relationships. A ten-point motion, seconded by Bishop Michael Stead, reaffirmed man/woman marriage as the doctrine of scripture and of the Anglican Church, declared that blessings or affirmations of same-sex marriage are contrary to scripture and called for action where the doctrine was not being upheld. 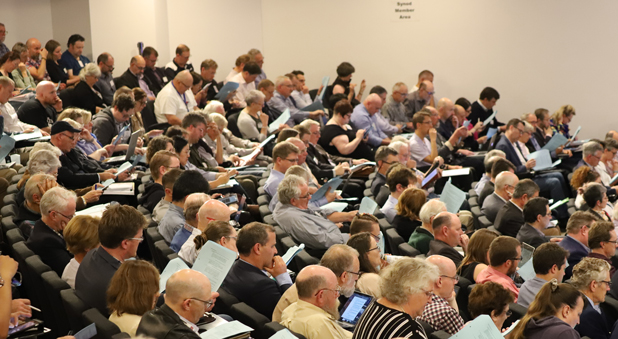 “The Bible's teaching on marriage is profound, unfolded through all of Scripture - Old and New Testament, from Genesis to Revelation - and deeply related not only to personal and social life but the doctrines of salvation, the church and the new creation.” The Dean said the fact that the doctrine of the Anglican Church of Australia is that marriage is the union of a man and woman in voluntary exclusive and life long commitment was affirmed by the General Synod in 2004, 2007, 2014 and in two resolutions of the General Synod meeting in 2017. The Synod had also acknowledged that same-sex blessings in New Zealand had been contrary to a resolution at the last full meeting of the world’s bishops in 1998 in Lambeth.

“I said at the beginning that the actions of those seeking to overturn the teaching of the Bible on marriage risked rending the fabric of our fellowship.  This is true. But it is not the worst effect of these revisionist moves. It is not only our fellowship at stake. Even more seriously, departures from the teaching of Jesus on this subject are contrary to faithful discipleship and witness, deeply injurious and dismissive of countless millions of Christians living in accordance with God’s word - and perhaps most grievous of all, deprives people who identify as gay of the truth about God and his gospel.”

Apart from reaffirming current doctrine, the motion declared that the Diocese of Sydney ‘is in a state of impaired fellowship with any diocese that, or bishop or other minister who, has allowed or participated in the blessing or solemnisation of a marriage that is contrary to the doctrine of marriage of Christ and this Church, and with any bishop who fails to take disciplinary action against a minister holding a licence in that bishop’s diocese,’

The motion also asks the Archbishop to ‘decline any request to exercise ministry in the Diocese of Sydney from any bishop or other minister who has unrepentantly allowed or participated in a blessing or purported solemnisation of a marriage, which is contrary to the doctrine of Christ and of this Church,’ and ‘asks the Standing Committee to consider not providing financial support, whether directly or indirectly, to any Anglican diocese or body which has acted, or has allowed others to act, in a way that is contrary to the Church’s doctrine of marriage’. The motion passed easily. 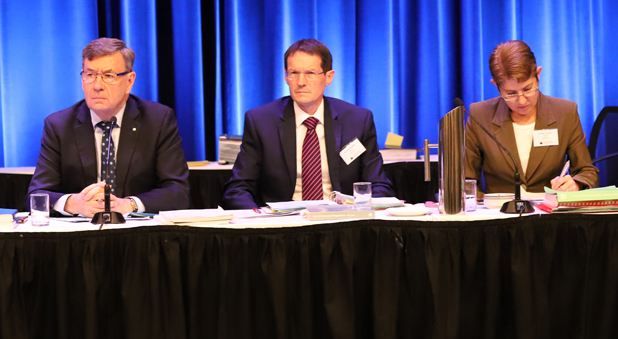 Immediately afterwards, the Synod considered a motion which, if left unamended, sought to defer payment by the Sydney Diocese of the General Synod assessment because of the moves to same-sex blessings by other dioceses. This is a payment which contributes to the running of the General Synod of the Anglican Church of Australia and would amount to more than half a million dollars in 2020.

An amendment moved by Dr Karin Sowada and seconded by Bishop Michael Stead removed the deferral of payment and called for a report from Standing Committee including legal advice, on future assessment payments. Dr Sowada described the deferral of payment close to the ‘nuclear option’. “I believe we may at some point need to do this but now is not this time,” she said. “There is a manifest unfairness to do this without having signalled it to the General Synod office ahead of time.”

Dr Sowada said Synod in 2020 could make a more considered and wise decision. “You can be sure that the ripples of this debate will find themselves all through the national church but now is not the time to do that. I hear the frustration (of Synod delegates) that this debate is moving fast and we need to make our views known - but we have made our views known by even having this debate.”

The amended motion passed, with 80 percent in favour.

At the Synod of the Diocese of Melbourne, also in October, the Synod expressed its 'sorrow' to the Bishop and Synod of the Diocese of Wangaratta for their move. Melbourne Synod also welcomed the formation of the Church of Confessing Anglicans Aotearoa / New Zealand, and assured the church and its first bishop, Jay Behan, of 'our love and prayers'.

Waiting for the day of the Lord