The week-long missions are only at the half-way mark, but teams have been working with local parishes to brave the rain, doing activities ranging from knocking on doors to helping run kids clubs and youth groups.

For the first time in at least eight years, all 16 Moore College mission teams are based in Sydney, in order to support parishes with their Connect09 plans.

Doorknocking and leafleting have been especially popular strategies this year in several parishes.

One of these is All Saints, Waitara, who is sharing a mission team with St Andrew’s, Wahroonga.

Waitara’s last doorknocking exercise on a mission a few years ago involved only one member, but this year, rector, the Rev Bruce Stanley happily conveys that over 30 church members took part.

"We've actually been doorknocking for the last four weeks, so the Moore team helped us finish off our doorknocking " we only have 150 people, so to have over 30 people doorknocking this year is fantastic," he says.

Mr Stanley adds that the resources Connect09 has produced for churches " in training and to give away " have been the catalyst.

"Connect09 has given us the resources and the motivation to be prepared and ready for mission. It's helped us to think strategically.” 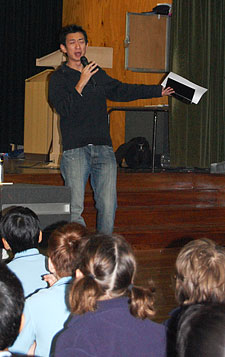 Thousands of Colin Buchanan DVDs are being handed out in Scripture classes and at Easter school services this week, while it’s likely that thousands of Sydneysiders will receive a copy of Essential Jesus, or a gospel in another language.

Moore College’s head of missions, the Rev Greg Anderson says doorknocking has been given more of a spotlight in students' preparation for mission this year than it has previously, especially as Sydney aims this year to lower the 60 percent figure of Australians who don't know a Christian.

"I think the thing to keep emphasising is that with Connect09, parishes are seeing a responsibility to their geographical area," he says.

"Doorknocking means we care about everybody in this geographical neighbourhood, not just the people that we have a social network with."

Mr Anderson takes on those who see doorknocking as an intrusion into people's privacy by pointing out the successes he has seen in his mission in the Villawood and Berala areas so far, where his team’s mission is focused on connecting with people of other faiths.

"Many of the people we're having good conversations with have been in Sydney one month " they have no social networks, they're actually eager to have contact with strangers from the church, just because they're a human face."

The Rev Antony Barraclough agrees, as the mission team at All Saints Petersham powers through the church’s four-week program in one week, or what he calls ‘Connect09 on steroids’.

He says doorknocking is already yielding fruit, with several residents showing interest in the church's ESL programs, and one woman telling her visitors "I've been wanting somebody to ask me to church'.

Meanwhile other churches have found leafleting in supermarkets, bus stop lines and railway stations an effective way of getting church information and the Essential Jesus (and often a chocolate as well) into the hands of shoppers and commuters.

For students at St Andrew's Cathedral, the CBD location was ideal for handouts.

"One of our great advantages is that we have so many people around the Cathedral during the week, so students have had a great time sharing the gospel with a variety of people," says senior minister, the Rev Chris Moroney.

"There are especially a number of overseas students who are sitting around the Cathedral and after they've been talking with the Moore College students, you can see a number of them reading the Essential Jesus."

While women's coffee and dessert nights and men's breakfasts continue to be popular gender-specific events, some churches have been trying events with a difference. 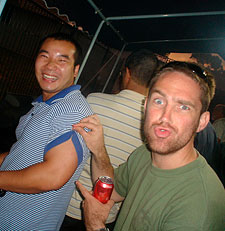 At least two churches have put on Men and Meat nights, with butchers giving tips and recipes for cooking different cuts of meat, and college students giving talks and testimonies.

"We had four courses and they were all meat " you know you've had a good night when you've had lamb for dessert " and there was a meaty gospel message," grins the Rev Gary Haddon, rector of St Clair Anglican Church.

Forty percent of men who turned up to St Clair's event were not from the church, and Mr Haddon confidently says the night was "the best men's event I've ever been to " ever!".

Women's events have included a chocolate Easter-Egg-making night (Petersham), a fashion/colours demonstration (Glenhaven), a high tea at a cupcake shop (Centennial Park) and a Middle East Feast (Springwood), which included a Lebanese dinner and bellydancing demonstration attracting over 150 women.

Springwood Anglican Church will run a stall that will be part of Foundation Day, an annual festival run by the local Chamber of Commerce commemorating the founding of Springwood.

Students on the team at Villawood/Berala have had a slightly different week so far, visiting the local mosque and attending the local Muslim Students Association weekly gathering as invited guests.

Their Saturday event will be a halal barbeque in the grounds of St James’, Berala.

Meanwhile on Saturday night, St Andrew’s Cathedral will open its doors for a free Celebration Dinner, which senior minister Chris Moroney says is designed for "people who are in the city with time on their hands”.

What makes a good relationship?