“This conference couldn't have come at a better time,” said Bishop Richard Condie, the chairman of GAFCON Australia, as he looked out over hundreds of Anglican leaders at the National Convention Centre in Canberra. “We are at an important moment in the history of the Anglican Church in Australia.”

Bishop Condie said one of the goals for the conference and GAFCON leadership was to “get on with the task of reaching Australia for the gospel through Anglican churches”.

To that end, he officially announced the formation of the Diocese of the Southern Cross. It was a response, he said, to an emergency in the Anglican Church.

But Bishop Condie said the issue was wider than marriage and sexuality. “The issue for us is the authority of the Bible.”

The Diocese of the Southern Cross is a new structure for Anglicans in Australia who can no longer sit under the authority of their bishop. The initial bishop of the diocese will be one of Australia's most experienced church leaders, Bishop Glenn Davies, who was formerly the Archbishop of Sydney.

The diocese was described as a new ecclesial, extra-provincial structure for Australia.

Just 24 hours before the conference began the first church of the new diocese, Southern Cross Anglican Beenleigh and Logan, met under the leadership of the Rev Peter Palmer. 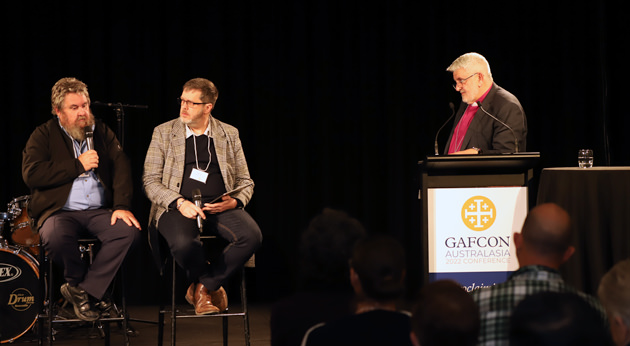 (Above: The Rev Peter Palmer from the Diocese of the Southern Cross speaks at the conference, alongside the Rev Peter Judge-Mears from Brisbane and Bishop Condie)

“The Diocese of the Southern Cross is thoroughly Anglican,” Bishop Condie said, which drew applause from the audience. He then announced the commissioning of Bishop Davies at the end of the conference on Thursday, which drew further acclamation.

“We have been led by the faithful example of Anglicans in the US, in Canada, in Brazil and in New Zealand,” he added. “We long to see all Australians come to know the love of Christ. This love of Christ cannot be known unless our witness is faithful and clear."

The diocese has been recognised by the international  GAFCON movement, which embraces the majority of the world’s worshipping Anglicans.

Archbishop Kanishka Raffel said the Diocese of Sydney is committed to the reform of the ACA from within our existing ecclesial structures including the General Synod but said as Archbishop he was “happy to extend the hand of fellowship to the Diocese of the Southern Cross and may God bless Bishop Davies and his work.” Read the Archbishop’s statement here.

1.
How one Church is helping people 970km away
2.
And so it begins
3.
Local love for COVID-ravaged Oakhurst congregation
4.
Mission to Menai continues