Day two of the Oxygen conference opened with a call from John Piper to remember that ‘right thinking about God exists for the sake of right affection for God’.

Piper went on to explain that to fully glorify God, as he had spoken about previously, a Christian needs to know and understand God.

“God is honoured by a satisfaction that is rooted in knowledge,” he said. 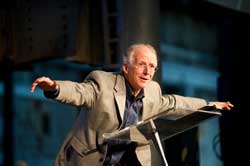 The challenges that have been layed down by John Piper have not gone unnoticed by conference delegates, who have found Piper’s passion for the gospel infectious.

“John Piper was brilliant talking about the responsibility we have to think carefully through what we know and understand about God, it was really very impressive” said Bishop Ross Nicholson, one of a number of Tasmanian pastors attending the conference.

The conference has not only given church leaders a break from their ministries for a few days, it has also allowed students from Moore College to think about what sort of church leaders they want to be.

“It's really affirmed in my mind that it is worth taking time to go to college” said Moore College student Katie Hooton.

"At times it's easy to feel like it's a selfish decision because you've taken four years out of working and in a lot of ways being involved in ministries" she said. "But he's really encouraged me that taking that time out to think through the bible and its power and strength to change lives is really important for the people we serve."

Archbishop Peter Jensen believes that the opportunity that ministers have to take some time to be taught from the Bible themselves is invaluable.

“Ministry, particularly in today's world, is tough work. So for people to get together like this and have that special moment of fellowship, means a great deal. It's called oxygen, it's giving us oxygen.”

The second session of the day saw Professor John Lennox again challenge delegates to consider how to respond to arguments against Christianity. 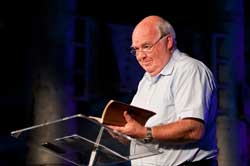 “The space between the first and second coming of Jesus raises a number of questions. We need to look to the cross for the reason to trust God in these times.” 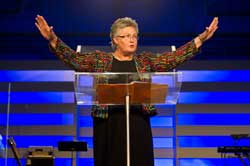 Technology has also played a large part in the Oxygen conference. #oxygen11 became a trending topic on Twitter in Sydney on day one, giving people not able to attend the option of staying in touch with the topics that were being discussed.

Day Two - Truth with a glint in the eye