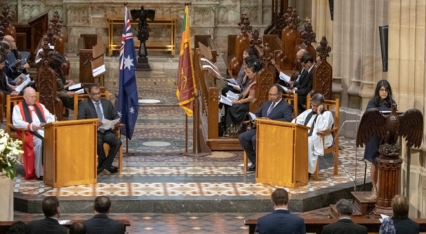 Three Christian leaders from across denominations came together with the Sri Lankan community in Sydney for a Service of Commemoration for those affected by the bombings in Sri Lanka.

More than 250 people died and around 500 were injured when suicide bombers targeted churches and hotels on Easter Day. The bombers attacked packed Easter services in the cities of Colombo, Negombo and Batticaloa.

“Sri Lanka is dear to us all and these attacks have wounded us all,” said Dean Kanishka Raffel, his voice breaking with emotion as he introduced the service on Saturday 27th April at St Andrew’s Cathedral. “We renounce evil and violence. We gather to pray for freedom and peace for all.” The Dean is of Sri Lankan heritage and he was joined by two other Christian leaders, the Sri Lankan-born Moderator of the Presbyterian Church, the Reverend Kamal Weerakoon and Pastor Dilan Jayasinghe representing The Baptist Association of Churches, NSW & ACT. 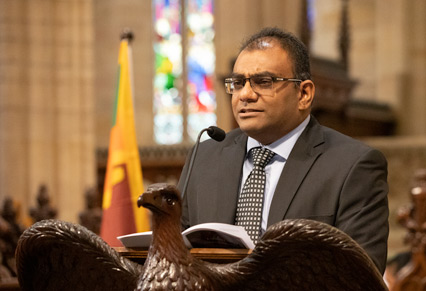 “I was born in Negombo hospital where most of the wounded were taken from the worst attack,” Pastor Jayasinghe said. “It is a bustling city, a melting pot of ethnicities and religions which overnight became a big funeral house.” He said Sri Lankans in Australia had watched the TV coverage to see “...fathers and mothers, husbands and wives, little brothers and sisters wailing uncontrollably unable to bear the loss. Many realised the carnage is beyond human repair - so ‘Pray for Sri Lanka” became the slogan on many of my friend's social pages. I saw (on the television coverage) the wife of Ramesh Raju, who tried to stop the bomber entering the church in Batticaloa, say through tears 'I love my Jesus only, I love my Jesus only'. I appeal to him for peace and invite you to do the same.” Pastor Jayasinghe said.

The Reverend Kamal Weerakoon said the attack, which appeared to come from Islamic extremists, is unusual in Sri Lanka. He also appealed for peace and justice but said those behind the attack could find forgiveness, despite the atrocity. “You can bomb and slaughter Christians while we celebrate the resurrection of Jesus - it will not take Jesus off the throne,” he said.

God of all comfort and Father of compassion, we pray for the people of Sri Lanka, that they may know your help and strength in this hour of trial and grief.  Please sustain and comfort those who grieve this tragic loss of loved ones; heal and restore all those injured and traumatised. Grant them your peace which transcends understanding and give wisdom, compassion and skill to those who treat them.  In Jesus’ name. Amen.

(A prayer for Sri Lanka, used at the service) 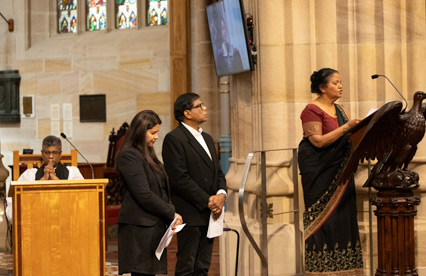 Members of the Sri Lankan community led in prayer for the families of those killed, those wounded, and the nation. The congregation included Mr Lal Wickrematunga, the Consul-General of Sri Lanka and Ms Linda Daetwyler, the acting Consul-General of the United States of America, one of eight countries which lost citizens in the attack. Mr Scott Farlow MLC represented the Minister for Multiculturalism and members of the Multicultural Advisory Board, as well as Mr Khaled Sukkarieh of the Islamic Council of NSW, were official guests. 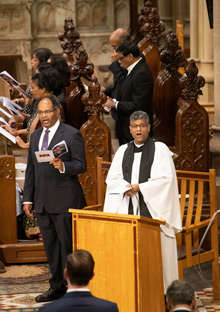 Dean Raffel based his sermon on the account of the raising of Lazarus from the Gospel of John. “Resurrection Day, Easter Sunday is the most precious of days for Christians.  Many of those who were murdered last Sunday were celebrating Easter. That so many should die at a celebration, that so many should die in the act of worship - is unbearably wretched and cruel, deeply sad, and virtually impossible to comprehend. The Scriptures are neither sentimental nor naive about the wickedness of which the human heart is capable. But neither are they without hope for a broken and hurting world.  Our hope is in Jesus.” the Dean said.

“Easter is the celebration of Jesus’ victory over death.  If we cannot trust Jesus in this moment, there is no point celebrating him at all.  So in the midst of tears, in the shadow of heinous crimes and incalculable suffering, we find our firm ground to stand on today in the truth that was proclaimed by our sisters and brothers perhaps only minutes before their death.  We proclaim, ‘Christ is risen! He is risen indeed!’”

Main photo above (l to r): The Bishop of North Sydney, Chris Edwards, Pastor Dilan Jayasinghe, the Reverend Kamal Weerakoon, Dean Kanishka Raffel and the Bible is being read by Kishani Gunawardene