Bishop Ken Short AO, former missionary, military chaplain, Dean of Sydney and Bishop of Wollongong, Parramatta and the Defence Forces, has died at the age of 87.

Archbishop Glenn Davies, who visited him in hospital at the weekend, described Bishop Short as 'a faithful pastor, a gracious leader, and an elder statesman of the Sydney Diocese’.

“He had international experience and was greatly respected around the world. He had a significant impact in all the ministries in which he was involved, whether in parish, chaplaincy, missionary service or diocesan leadership ” Dr Davies said.

Born in 1927 as the son of a well-known clergyman, Kenneth Herbert Short was ordained in 1952 and served in the parishes of Mosman and Pittwater before offering himself for missionary service in what was then Tanganyika (later Tanzania). On his return, he served as General Secretary of CMS and then had an influential ministry as rector of Vaucluse.

Archbishop Loane appointed him as Bishop in Wollongong and he later was made Bishop of Parramatta under Archbishop Robinson.

“Ken also served the last Chaplain General (Major General) in the Australian Army and as the first Bishop to the Defence Force” Dr Davies said. “He had a significant and lasting impact on the Forces and in particular on highlighting the value of military chaplaincy.”

“Ken was an evangelist at heart and loved to see the Gospel going forward” Dr Davies said. “He was a great supporter of Evangelism Explosion and other evangelistic ministries.” 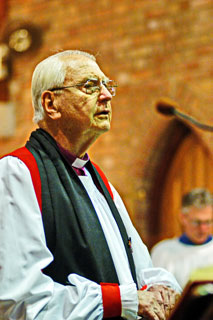 Bishop Short has three children, all involved in ministry, including Canon David Short, who has been in Canada for more than 20 years.

Archbishop Davies asked for prayer for Bishop Short’s widow, Gloria and their family.

“We pray for Gloria who has been an outstanding woman of God and woman of faith in her own right as well as in the support she gave to Ken throughout their lifelong ministry.”

On the final day of the Sydney Synod, a motion of thanks, tribute and condolence to the family, was passed overwhelmingly.

Bishop Peter Tasker spoke of the blessing Bishop Short and his wife Gloria had been to many.

"Even up to a couple of weeks ago Ken was leading Bible studies in Kiama and people were growing in their faith." Bishop Tasker said. "Their impact in ministry has been an impact on people."

A funeral service with military honours will be held at St Andrew’s Cathedral in Sydney, on Monday, 27th October at 2pm.

The funeral will be streamed live on the Internet - to watch, click here.

Get children out of detention says Synod