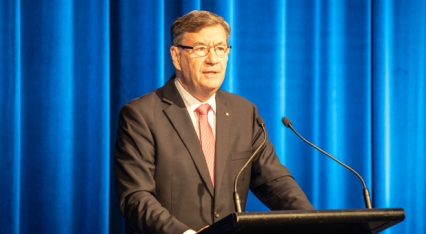 Archbishop Glenn Davies has rejected what he called the mischievous misrepresentation of the Ruddock Report and given a clear statement that Sydney Anglican Schools do not expel students for being gay. He also promised support for Prime Minister Morrison's reported legislation, if it were deemed necessary.

Reports of recommendations of the Ruddock Report, leaked last week, were used to accuse church schools of wanting to expel gay students.

"In this past week, the enemies of religious freedom have been hard at work. The selective and distorted leaking of the recommendations of the Ruddock Review has been nothing more than anti-religious activism masquerading as journalism." Dr Davies told the opening of the Church's Synod or Parliament in Sydney.

Excerpt about the Ruddock Report (above)

"This week has exposed the hypocrisy of those who, during the same-sex marriage campaign, repeatedly told the Australian public that same-sex marriage would have absolutely no consequences for religious freedom.   Now they have revealed what has always been their agenda–to force religious schools to play by secular rules."

"Although I am wary of commenting upon a report that has yet to be released, the Ruddock Review, after a careful and thorough analysis and extensive public consultation, has proposed a set of sensible recommendations to ensure that Australia protects all human rights, including freedom of religion.  There is, in fact, nothing objectionable in the Ruddock recommendations. But in an attempt to scupper the Ruddock ship while still in the docks, its recommendations were mischievously misrepresented. Then ensued handwringing hysteria about an imaginary epidemic of gay students being expelled from religious schools, and this was accompanied by much ill-informed knee-jerk reaction."

"Let’s be very clear. Anglican schools in Sydney do not expel students for being gay. It is an absurd proposition and it is certainly not something we asked for in our submission to the Ruddock Review. We would gladly support any amendment to the Sex Discrimination Act 1984 which would clarify this. This issue was nothing more than a beat up and smoke screen to discredit the Ruddock Report and obscure the real issues."

"What we have asked for is simply this: freedom of religion. People of all faiths and none should have the right to speak and act according to their fundamental convictions. Church schools should NOT be forced to play by secular rules. It goes to the very heart of religious freedom that religious organisations should be able to operate according to their religious ethos.  Anglican schools, if they are going to remain Anglican, must be able to employ staff who support the Christian values of the school. When the Ruddock Report and the Government’s response is released, it will be time to have an informed national conversation about this. Despite the delay in its release, the report deserves due process and careful analysis before it is kyboshed by the media and ill-informed political commentators."