The Archdeacon for Women spoke with sadness and anger in her voice, as she told Synod of the damage wrought by domestic abusers.

Archdeacon Hartley, along with Canon Sandy Grant who chairs the Domestic Abuse Task Force, came to Synod to present the final version of the Sydney Anglican Policy on Responding to Domestic Abuse.

Although the provisional policy has been in force and circulating among churches since the 2017 Synod, the Task Force had left open the policy and guidelines as it gathered further information on the best ways to combat the scourge of Domestic abuse and family violence.

Members of the Task Force sat in the public gallery as Synod unanimously declared the policy was finalised and thanked them for their work.

“Over the last year, as you requested, we received feedback on the provisional Policy. Importantly, two members of the Task Force met with a group of victims and survivors of domestic abuse who were former spouses of clergy and ministry workers.” Canon Grant said. “These women made many suggestions regarding the Policy and Guidelines. The Task Force thanks all who took the time to respond, and especially the courage of survivors, in offering their valuable perspectives. Many of their suggestions related to improving how our Policy is more helpfully heard and received by victims, as well as avoiding a shallow view of repentance.” 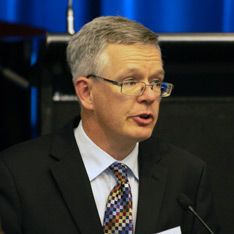 Canon Grant outlined the changes the committee has made to the provisional policy.

“We underline that Clergy and lay ministers do not typically have professional expertise in the area of domestic abuse. Faithfulness in Service explicitly advises us to obtain professional advice.” he said.

Abusers can be 'groomers'

There were also clarifications that the safety-first priority for victims must include their continuing to stay safe, not just finding safety in an initial crisis.

He said “...yielding to domestic abuse that enables sin to continue without consequence is not good for her, for him, for their marriage, or for the children. It’s bad in every respect. So we must avoid cheap grace and shallow understandings of forgiveness.”

Archbishop Davies has urged parishes to follow through on the recommendations, including establishing a local Domestic Abuse policy, if they have not already done so.

Archdeacon Hartley spoke about the distribution of publicity materials, in several languages.

“Not only will this help to educate but it helps to alert people to our church’s stance on this behaviour. We know that clergy and church workers can feel out of their depth when dealing with cases of Domestic Abuse at church. We are pleased that the PSU has undertaken to develop a training module to help us navigate our way through.” Archdeacon Hartley said.

On abuse among ministers or lay workers, Archdeacon Hartley said “The Episcopal team is very committed to supporting the spouses of clergy and lay ministers who are victims of domestic abuse, especially knowing that if the marriage fails or there is a need to separate, housing may become a critical issue, as well as schooling. These are significant pressure points and vulnerabilities that need to be catered for.”

A ministry spouse support fund has been established for such situations.

Archdeacon Hartley also spoke of materials being produced to help victims recognise when the Bible is being misused against them.

“As I have been preparing for tonight, I've been struggling to capture my own feelings at the evil that is done when God’s precious word is twisted and used to excuse violence.” the Archdeacon said in a heartfelt address.

“I feel sadness and then I get so angry. To act violently is evil in itself but to falsely claim divine sanction is so outrageous.”

Roughing it for Rough Edges