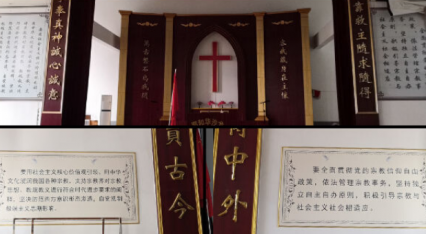 Reports from China indicate deepening persecution of Christians, including the closing of Sunday schools and replacing the Ten Commandments with slogans from Communist Party leader, President Xi Jinping.

Chinese authorities have reportedly become nervous about the rise of Christianity and the protests in Hong Kong, in which Christians have played a key role. Official estimates put the number of Christians in China at 30-40 million, but the persecution watchdog Open Doors estimates there are up to 100 million believers. China is forecast to have the world’s largest population of Christians by 2030, overtaking the United States.

As well as in larger centres such as Beijing, Christianity is booming in rural regions such as Hebei, Henan and Anhui, with large areas of disadvantage or poverty. The Christian population is split between membership of state-sponsored churches, such as the so-called Three-Self Patriotic Movement, and underground or house churches.

Persecution is worsening: Churches have been forced to change the 10 commandments

The religious liberty magazine Bitter Winter has reported several recent incidents that show persecution is worsening. The magazine says churches in the central province of Henan have been forced to replace signs showing the Ten Commandments with quotes from President Xi Jinping.

“The core socialist values and Chinese culture will help to immerse various religions of China," reads one of Xi’s quotes. "Support religious community in interpreting religious thought, doctrines and teachings in a way that conforms with the needs of the progress of the times.”

Church leaders say it is part of eroding Christian doctrine in the official Three-Self churches, which can be blacklisted or shut down if they don’t display the messages.

Another report says the Communist Party has begun to restrict Christian activities for children, in line with a long-standing law against religious conversion under the age of 18.

The Religious Affairs Bureau has reportedly begun to enforce the law by closing Sunday schools and ordering churches to erect signs accordingly.

Police stations have even been given quotas that reward them for the number of Christians they arrest.

One Protestant pastor told the magazine that “The Communist Party’s ultimate goal is to ‘become God’. This is what the devil has always done.”