There’s been a sharp upturn in the persecution of Christians in Pakistan since the start of the year, with increasing numbers of “blasphemy” cases.

In addition, a recent ruling by Pakistan’s High Court that all citizens must declare their religion when applying for identity documents will probably increase pressure on minorities. Christians make up less than 2 per cent of Pakistan’s Muslim-majority population of 200 million people.

Pakistan has strict laws against insulting the Prophet Muhammad and these blasphemy cases can attract the death penalty. Even rumours of blasphemy can trigger mob violence and death or severe injury to Christians.

“Persecution is double – if you see the persecution rate after New Year 2018 till now you can see double the number of blasphemy cases,” says Angela Michael, who operates an anti-slavery project in Pakistan supported by Anglican Aid.

The most famous blasphemy case in recent years is that of Asia Bibi, sentenced to hang in 2010, accused of insulting the prophet of Islam when she drank water from a well in her village and then offered some to a Muslim woman. A crowd gathered, claiming she had polluted the well by drinking from it and demanded she become a Muslim. She was arrested when she refused to convert and remains on death row. 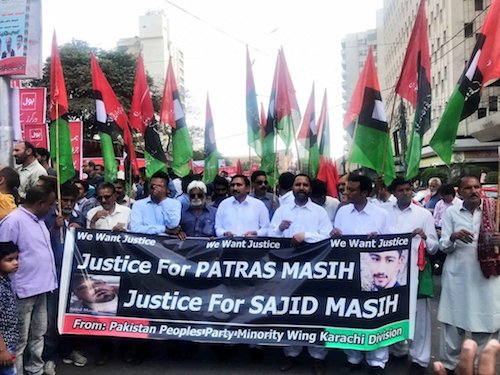 Two men who supported her and campaigned against blasphemy laws – the governor of Punjab, Salmaan Taseer, and Minority Affairs Minister, Shahbaz Bhatti – were assassinated in separate incidents.

The most recent high profile case involves 21-year-old street sweeper Patras Masih, who was accused of having shared an allegedly blasphemous image on a Facebook Messenger group, showing a man standing with his foot placed on the dome of a mosque.

After his cousin, 24-year-old Sajid Masih, was called in for investigation, Sajid said investigators tried to get him to sexually assault Patras and he jumped from the fourth floor of the Federal Investigation Agency's headquarters in Lahore to escape their demands. Friends say he broke almost every bone in his body and is still in a critical condition.

Angela Michael, who recently toured Sydney promoting the work of the Miracle School among slave workers in the brick kilns of Lahore, says the persecution is in retaliation for international political events.

“There are some people, presidents, who are pretending they are very Christian and crushing the Muslims in their countries,” she said. “It is a concept in Pakistan that all white people are Christian. That's why they are crushing down all the Christians in Pakistan.”

As for Asia Bibi, Michael asks, “Where is she now and what was her sin? Just drinking water from the same cup where non-Christians were drinking and she has been persecuted. Now, nobody knows. She has been in jail and many lawyers tried to save her but she is… well, no one knows where she is now.”

1.
Open Doors reports global persecution has increased during the pandemic
2.
War poses imminent threat of persecution for Iraqi Christians
3.
Archbishop calls for an end to Iraqi persecution
4.
One in 9 Christians experience high levels of persecution

A heart for Subcontinental people