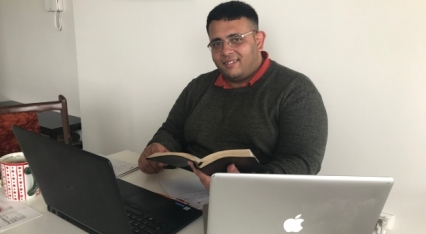 With COVID-19 forcing parishes to shift evangelistic activities online, many are seeing increased attendance at courses that explain Christianity. Some churches have reported their course participants have doubled in the move to online delivery.

The Rev Phil Wheeler, director of Evangelism and New Churches, says there are several explanations for this, including the format itself.

“I can click off at any time,” he says. “Online seems to be a safer space, a toe-in-the-water space, and then people warm up. Another factor may be the many emotions people are feeling. [Society is] searching for answers in a worldwide challenging thing. It reflects that there’s more uncertainty or anxiety.”

Regardless of why people are joining, Mr Wheeler believes this is a time to rejoice. “The doors might be closed but the hearts are open. The gospel is never bound. We all had to invent new ways but it doesn’t stop the gospel going forward. Jesus is building his church, so we should rejoice.”

“The doors might be closed but the hearts are open. The gospel is never bound.”

Emu Plains Anglican wasn’t sure how people would respond to them taking their four-week faith course online. The church ended up with twice as many people joining online than would usually take part in person.

“We had 16 people who completed the course,” says the Rev David Simmons, who focuses on connecting and evangelism in the parish. “There was a mix of church members and outsiders. We had three people say at the beginning of course that they didn’t call themselves Christians, and after the course they’re confessing Christians.”

Mr Simmons feels some of the success came from removing a few common barriers. “Just the physical barrier of having to get dressed and go into a church you’ve not been to before [was gone],” he says. “All the anxiety around having to talk to people was removed – they can just log in and listen. One thing I noticed was people asked a lot of questions on Zoom. We do get questions in the flesh, but not as many.”

However, moving online has made follow-up more challenging. “It’s hard to build relationships with new people like you can when they come here, and it’s hard to follow up because you haven’t met people properly,” he says. “The content is fine, but the relational things are much harder.”

Go above and beyond to build connection

The folks at St Michael’s, Wollongong had record attendance at their online five-week Simply Christianity course, with nine attendees who were not regular members of church. People put in an extra effort to ensure that each attendee felt extra cared for and connected during a time of isolation.

“Although Matthias Media have now made their participant manual available for purchase digitally, I decided to home-deliver manuals,” says rector the Rev Canon Sandy Grant, who runs the course.

Physical booklets weren’t the only connection point. Each participant received home-baked goods from Canon Grant at the start and end of the course.

“I traditionally supply dessert when I run a course, and I always start with Toblerone cheesecake,” he says. “It’s a bit of a ‘thing’ associated with functions I host, and it actually helps as a little relational motivator, too. On the afternoon of the final night, I also home-delivered a licorice allsorts chocolate slice to celebrate making it to the end.”

Participants' feedback about the course was positive. Several expressed significant spiritual growth and are keen to continue studying the Bible in some form.

...almost half the participants would stay for up to an hour extra asking questions.

Make the most of the times

Inspired by the online evangelism resources created by Moore College students, Ben George invited his 2800 Facebook friends to join him for a six-week look at what Jesus has to say.

Mr George, who attends Auburn Anglican, created a public Facebook event and sent additional personal invites to those he thought might be interested in the Jesus Perspectives course. On the first night, 24 people logged on to see what Jesus had to say about sickness.

“There were people there I wouldn’t have otherwise had personal contact with,” he says. “Because it was online, and because they had free time due to restrictions, they were willing to explore the Bible a bit.”

Although Mr George capped the content at 90 minutes, almost half the participants would stay for up to an hour extra asking questions. When the course ended, the group asked Mr George to lead studies on Amos.

“The group would say they were churchgoers, but their understanding varied from a college student to some who didn’t know Jesus had something to say about death and resurrection,” he says. “This group got them to take the Bible seriously.”

Mr George believes people are more willing to explore than we expect. “A lot of the hard-heartedness of Sydney comes from us being in control; we’re spoiled for choice. When we are suddenly restricted and have a bunch of questions, it’s not about what’s the most fun, it’s about what’s most important. That’s where the Bible is perfectly relevant. This is good to do. Our business is helping people understand the gospel.”