MPs urged to ‘Care for the most vulnerable’ 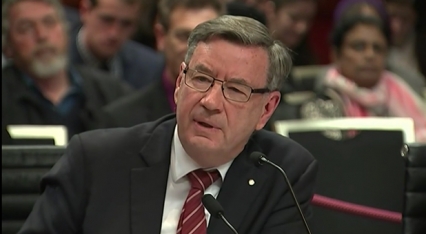 Archbishop Glenn Davies has told a State Parliamentary inquiry that the catchcry of new legislation has been 'decriminalisation' but skates over the details that it radically extends abortion in New South Wales.

Abortion is not unlawful in New South Wales under certain circumstances because of a precedent set by the ruling of a District Court Judge in 1971.

The new legislation, which allows for abortions up to birth without effective safeguards, has had minor amendments in the state's Legislative Assembly and now goes to the Upper House for scrutiny and then a vote.

After two weeks of media appearances and joint appeals with other religious leaders, Dr Davies was able to speak directly to the Upper House MPs who form the Social Issues Committee of the Legislative Council.

Dr Davies said the bill had been rushed and that many people did not know what it contained.

"I think that you have (enough) time to consider carefully, consultatively, in a way in which to get the very best Bill. I'm not opposed to changing the Crimes Act with regard to abortion, not removing it because (even) this bill doesn't remove it completely. But I prefer to see legal statements rather than opinions of judges." Dr Davies told the committee. "You are the representatives of our state and that's why I'm here. Because I think the best needs of our state is to send this back to the drafting board, do proper consultation and come back with a Bill which is actually going to care for women who are pregnant with all the concerns and the emotions involved with that and care for the unborn as well. And care in a way which establishes that we, as a society, care for the most vulnerable. That is how society is judged, not by the way it treats the rich and the powerful."

When it was put to the Archbishop that women weren't trusted to make decisions about their own bodies, Dr Davies replied "When a pregnant mother holds a genetically distinct unborn child - it is not merely her own body."

The Archbishop also lodged a submission by the Social Issues Committee of the Diocese, which argued against the legislation on several grounds, including its impact on women.

"Women who contemplate abortions do not do so lightly. Women who have had abortions often struggle with the implications of having done so. We do not seek to condemn women who have had to make this tragic choice, but there should be every opportunity for women not to have to make this choice. The problem with this Bill is that it will have the effect of normalising the termination of human life in the first 22 weeks of pregnancy. " says the submission, signed by Committee Chair Emma Penzo.

"This Bill is premised on the idea that once a pregnancy is determined to be problematic, the only viable solution is to terminate the pregnancy. For all its flaws, the current system in NSW recognises that ending a child’s life in utero is a terrible thing. If as a society we are going to permit abortion, then we also need to do everything that we can to ensure that no woman is led to make that tragic choice because she had no other alternatives. This Bill is not pro-woman because it fails to acknowledge the emotionally confronting choice she will need to make. It leaves no room for other options as would be the case with any other healthcare plan."

The Diocesan committee's submission also details the way in which the Bill extends the current abortion practices.

"First, the Bill allows for the abortion of a baby well into the second trimester, namely 5 ½ months, for any reason or no reason at all. Currently, abortions are permitted on economic, social or medical ground where there is a basis for believing that the pregnancy poses a danger to the mother." it says.

The Bill also allows for the abortion of a baby after 22 weeks (5 ½ months), where the medical practitioner, in consultation with another, considers that, in all the circumstances, the termination should be performed.

"Most Australians do not support abortion at this late point because they know instinctively what biology tells us: that a baby of this age is able to survive outside the womb. The baby is fully formed, she can hear, taste, move and suck her thumb." Ms Penzo's submission says.

Dr Davies has also urged support for a petition on the legislation which calls on the Upper House of Parliament to reject the 'Reproductive Health Care Reform Bill 2019'.

The petition reads "This Bill, if enacted, will put both mothers and their unborn babies at risk by increasing access to abortion up to 22 weeks, with no effective restrictions on late term abortion. Furthermore, it would impose on medical practitioners with a conscientious objection to abortion, an unwarranted new legal obligation to facilitate abortion through referral."