Religious freedom bill in the House

A coalition of faith leaders, including Archbishop Kanishka Raffel and Bishop Michael Stead had previously called for the bill to receive bi-partisan support. "We are grateful that the Government has engaged in extensive consultations with a diverse group of faith leaders in relation to the latest draft of the Religious Discrimination Bill.” the joint statement from the leaders said. “This consultation is appropriate, given that any such Bill will necessarily have a significant effect upon people of faith and the religious bodies and organisations which they have established."

Bishop Stead has been involved in long-running negotiations on the bill and in public lobbying efforts as Chair of the Sydney Diocese Religious Freedom Reference Group.

The Act would make it unlawful to discriminate against a person on the ground of religious belief or activity in a range of areas of public life, including work, education, access to premises and the provision of goods, services and accommodation.

Key sections include the right of religious organisations to hire people who share their beliefs. The Bill says that the hiring of people who share their belief is not discrimination for religious schools but it does not cover the conduct of religious hospitals, aged care facilities, accommodation providers or disability service providers. Religious educational institutions must have a publicly available policy in relation to conduct in the context of employment.

To so many Australians, religion is inseparable to their culture. They are one and the same. To deny protection from discrimination for their religious beliefs is to tear at the very fabric of multiculturalism in this country.

There is also protection for people who make statements of belief in accordance with the doctrines, tenets, beliefs or teachings of their religion. This would override state laws. However, the bill would not cover statements of faith in circumstances such as the recent case involving rugby player Israel Folau.

"Human beings are more than our physical selves," the PM said. "As human beings, we are also soul and spirit. We are also, importantly, what we believe. For many, this can inform who they are more than anything else. The protection of what we choose to believe in a free society is essential to our freedom."

Mr Morrison called the Bill sensible and balanced, building on what he called "Australia’s proud record as the most successful multicultural, multi-faith nation on the planet."

"To so many Australians, religion is inseparable to their culture. They are one and the same. To deny protection from discrimination for their religious beliefs is to tear at the very fabric of multiculturalism in this country." 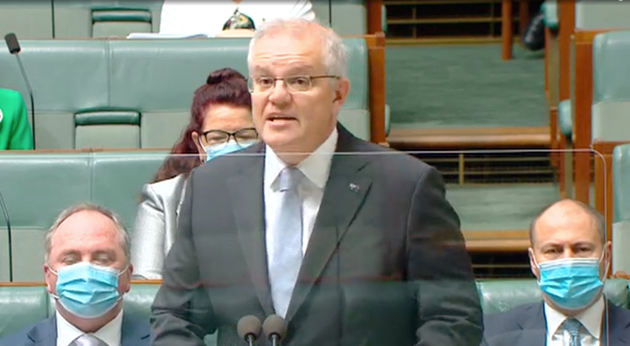 (above) The Prime Minister in Parliament on Thursday 25 Nov introducing the Bill. Watch on youtube.

The PM said people of faith and religion have played such a prominent role in the creation and establishment of free societies. "The underpinning principles of our free societies, indeed, the notion of liberty itself, Mr Speaker, draws heavily from the roots of faith. Religion and faith is also about humility and vulnerability.  It is about love. It is about compassion. It is about speaking the truth in love, as the scriptures say. It recognises the sanctity and dignity of every single human being."

"Intolerance towards faith and religion is to see the life of faith as a threat to nation and liberty and often the state. Mr Speaker, in so many settings, faith strengthens lives, it provides that sense of belonging. It builds and sustains and nurtures communities. I am so grateful for the contribution of countless Australians of faith - who have built schools, hospitals, food kitchens, shelters, started services to meet almost every human need you can imagine. We need institutions like the Salvos, Jewish Care, Lifeline, Muslim Women Australia, Mission Australia, the Brotherhood of St Laurence, and countless others, offering services large and small. They attend to the needs of the soul and the spirit - not just the needs of our physical selves.
To leave the fulfilment of such needs only to the Government or the state or the market is to weaken our society."

In a statement after the introduction of the Bill, Archbishop Raffel said, "I'm pleased that there appears to be a clear recognition from both sides of politics that religious freedom is an important part of our Australian democracy. After the Ruddock Report recommendations and the extensive consultation that has produced this bill, I urge a respectful debate and bipartisan support for its passage."

1.
Why Christians value freedom
2.
Freedom to have faith on the agenda
3.
Standing with Israel Folau and religious freedom
4.
Freedom of faith and Israel Folau

Synod steps into the “greenfields”