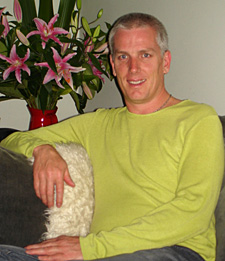 Simon Riches knows the struggle of same-sex attraction and the pain of living a homosexual lifestyle - now he is dedicated to leading others out of that same maze.

Simon has since put his trust in Christ and is helping others who face similar struggles through his work as the pastoral support co-ordinator with Liberty Christian Ministries.

But for almost seven years Simon led a life of self-destruction.

"My life was an absolute mess and I was heavily involved in drugs, homosexuality and prostitution. I was desperately looking for love and acceptance but not in the right places," Simons explains.

It was because of a friend who visited Simon's house with the express intention of talking about Jesus that Simon started thinking about Christianity.

"I was extremely shocked but also deeply impacted by his sudden ability to stop
using drugs. He invited me to attend a [church] service which I did, feeling very cynical and nervous," he says.

"I was very suspicious at people's expression of their happiness. I was convinced there was something coming out of the air conditioning affecting these strange people."

Simon was invited to attend another service and on September 1, 1985 he gave his life to Christ.

"I wasn't too sure what I had done but I knew I had done the right thing and for the first
time in my life I felt an indescribable peace in my heart."

Simon says Christianity "was a new culture and a new experience' which took time getting used to.

"The first 18 months of my Christianity were pretty unstable; I was still using drugs on occasions and sexually acted out twice. It took me a while to make the full transition to a fully committed relationship with Jesus Christ.

“But after 18 months I realised this behaviour needed to stop and I recommitted myself to following Christ. It wasn't easy but I finally realised that what Jesus Christ had to offer me, was much more than the drugs and sex."

Simon has been married for over 16 years to his wife, Catherine, and has two boys aged 14 and 12.

"On a personal level I have struggled with a same sex attraction and have had to work through the various issues that led me to pursue a homosexual lifestyle before I met Christ," Simon says.

"I don't believe I was born gay and there were significant issues in my childhood that I believe contributed to me developing a same sex attraction. My childhood was filled with brokenness and pain. I was sexually abused for many years, impacted deeply by my parents’ separation and divorce and then my mum died when I was 11.”

In the 1990s Simon worked with the Melbourne based ministry, Purple Heart, co-leading a recovery and support group for men and women with unwanted same sex attraction, pastoral care and also some speaking engagements in various churches.

Now Simon is employed as the pastoral support co-ordinator with Liberty Christian Ministries, who seek to provide support, education and a message of hope to Christian men and women who struggle with unwanted same sex attraction.

"The most important thing for me is encouraging people to continue to connect with God, to build their intimate relationship with Jesus Christ and to encourage people to keep walking with Him," Simon says.

"I want to leave people with a sense that they are deeply valued by God and that they are so much more than their unwanted same sex attraction. I really want them to find the support offered by Liberty Christian Ministries Inc. that gives them a sense of hope in Christ and the Church."

Simon has a message for those who struggle with unwanted same sex attraction.

"Don't give up. Don't give up walking with Christ and don't give up on your journey of healing and wholeness. Walk one day at a time. God is far closer to us than what we believe and so deeply in love with us. He just wants us to walk with Him and let His love and healing bring the change and growth that all Christians need, not just men and women with an unwanted same sex attraction.

"Hebrews 12 says Jesus is the Author and Perfecter of our faith and so no matter how lonely or down you are, no matter how hard it gets sometimes, just keep walking. Stay close to him, he will never leave or forsake us. Never!"

A bad photo or a modern miracle?