Sydney Anglicans have a new Archbishop

A synod of more than 800 members has overwhelmingly elected Bishop Glenn Davies as the 12th Archbishop of Sydney.

Dr Davies replaced Dr Peter Jensen who held the post for 12 years. For much of Archbishop Jensen's tenure, Dr Davies served with him as the Bishop of North Sydney.

The other nominee for the post was Canon Rick Smith, the rector of Naremburn/Cammeray, a large church on Sydney's Lower North Shore.

The final vote came after a complicated process of elimination ballots involving both houses of Synod - clergy and laity (lay people).

During an earlier elimination stage, a mix-up in vote counting made it seem as though Canon Smith had progressed through to the second round of voting. Between the sessions, there was an exhaustive recount which showed he had failed to gain the required majority in both houses.

The election then moved to the final stage and Dr Davies was elected. 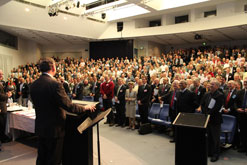 In a surprise move, Canon Smith appeared on the Synod floor and was given leave to be the first to speak in support of the motion proposing Bishop Davies name be moved to the 'final list', the last stage of the electoral process. Canon Smith was given a standing ovation by the Synod delegates. He also led the group in prayer for Dr Davies in his new role.

Both men have stressed their friendship and close working relationship in the church.

Bishop Davies is an experienced leader, overseeing a large region of Sydney parishes and multi-cultural ministries as well as roles in the Australian church and internationally.

The Bishop of Singapore, the Right Reverend Rennis Ponniah, gave the Synod Bible study, saying it was a privilege to be present on what he described as 'a significant and moving night' for the Diocese of Sydney. "We trust in God. So, rest in God's faithfulness and go forward to contend for the Gospel." Bishop Ponniah said.

After the vote was announced, the Archbishop-elect entered the theatre with his wife Dianne, to sustained applause and a standing ovation.

He thanked Synod for the vote, which was carried on the hands overwhelmingly, without dissent in either house.

He then read from a New Testament given to him at his ordination by Sir Marcus Loane in 1981. 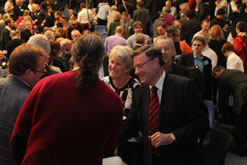 Dr Davies will be officially inaugurated as Archbishop at St Andrew's Cathedral on Friday, August 23rd.

The challenges of mission