This week our eldest daughter turned 13. High among her reasons to celebrate was the fact that she is now old enough to have a Facebook profile.

“You will not use Facebook if you are under 13”

Of course, just because Mark Zuckerberg says she is allowed doesn’t necessarily mean that my wife and I have to agree. I realise there are strong opinions on either side of the should-we-or-shouldn’t-we debate. We have good friends who have decided against allowing their children to be on Facebook even though they’re 15, as well as others who have allowed their children to sign up ahead of their 13th birthday (all it requires is entering a false birthdate – clearly a contravention of the SRR and not something I’m encouraging!).

We concluded that social media is here to stay – at least for the remaining five years of mid-adolescence for our daughter and most likely beyond then as well.

We decided it would be best for us to teach our daughter how to navigate this new world successfully rather than just putting up a sign that says ‘keep out’. Not that there’s anything wrong with prohibition in the right circumstances. We’ve had a ‘keep out’ sign over Facebook until now (and will leave that sign in place for our younger children). There are ‘keep out’ signs over alcohol at least until they’re 18, and the ‘keep out’ signs over smoking and recreational drugs are most likely to remain for as long as we have authority to maintain it. Part of teaching our children how to navigate this world is to know where the dangers lie.

In short, we’ve decided that it is now appropriate for our daughter to start having supervised access to Facebook.

‘Supervised access’ is the key phrase. Much like what we would have done if we’d owned a swimming pool.

When your children are toddlers you make sure the pool has a fence with a childproof gate. Up to a certain age and ability, the pool is simply a no-go area. Once the children are old enough to know how to climb the fence (or stand on a bucket to reach the lock) they’re also ready to exercise some responsibility: they need to learn that “just because you can open the gate without an adult doesn’t mean you’re allowed to”. For some years you’ll allow children to be in the pool as long as there’s a responsible adult with them in the water teaching them how to swim. Eventually you’ll allow them to be in the pool on their own as long as you’re watching them from inside the house. And once you’re confident they’ve learnt how to be responsible you’ll be happy for them to go swimming on their own.

When it comes to this new world of social media we’re not about to just let our daughter loose to fend for herself. We want to take on our responsibility of parents to ‘bring her up in the fear and instruction of the Lord’ even in relation to or, rather, particularly in relation to, the world of Facebook.

Hence the rules.This is the first thing that was written on her wall: 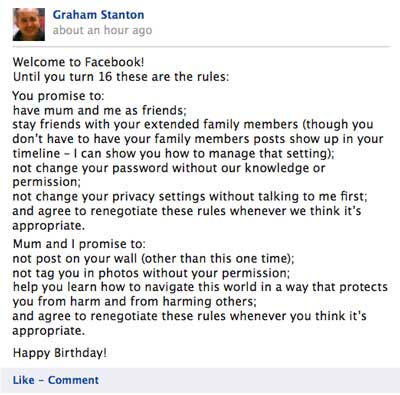 I’ve insisted that she remain friends with us, her parents, but have done so for supervision reasons, not so we can barge in on her social life. Much as I may dream of being ‘the cool dad’ that my teenage children and their friends love to have around, I am self aware enough to realise that this is a fantasy! We know how to be around as supervisors without intruding when our children have friends over to play – the Facebook equivalent is being friends but never posting on her wall, not tagging her in photos and not having our posts show up in her feed (if she doesn’t want them to). This is our rule for now.

We know other families whose children have no problem with their mum or dad posting on their wall, but they tend to be older than our 13-year-old. We’ll wait for her to say she wants to relax this rule rather than imposing our preference on her. Being friends with our daughter gives us access to her wall but doesn’t enable us to see her news feed. We can see what she’s saying to others, and what others are saying directly to her, but by just being friends we wouldn’t be able to see her messages or what her friends are saying to the world. That’s why we need to know her password.

For those who have carefully read the SRR, you’ll realise that we are therefore forcing our daughter to violate condition 4.8 (“You will not share your password … let anyone else access your account, or do anything else that might jeopardize the security of your account”). In my mind I’m going to apply Acts 5:29 – if they want to put me in jail for that, then of to jail I go (by the way, we also set her password for her and made sure it was strong – one that would take a desktop PC 4000 years to crack. Check the strength of your passwords here.

We’ve had to add a new discipline to our week – to log in to our daughter’s account and check what’s going on. The first few days we logged on with her and began teaching her the ropes. Within the first 24 hours of having a profile we had to deal with soft porn. What do you do when a friend (who happens to be a boy) has posted pictures of semi-clad women as his status update? I must admit that my first reaction was to think, “Oh, no! What have we done to our daughter?” (and this may well be enough to warn other parents against taking the route we’ve chosen).

My next thought was to remember our intention to help our daughter navigate a new world that has its own fair share of dangers. So we taught her how to stop friends’ status updates from appearing in her news feed. We talked about the mechanics and ethics of unfriending. We have made sure that she is friends with the online members of our extended family – uncles, aunts, cousins and her technologically savvy grandfather. Again, she doesn’t have to have their posts show up in her feed and we’ll want to remind her relatives to be conscious of the potential for embarrassing her online. But we wanted to add to the ‘supervisory community’; already the line “Remember that Grandad can see that” has been a helpful reminder to her to watch what she says online. The rules are also up for constant review. And they need to be, particularly if they’re going to continue to be an expression of teaching and trust.

Already there’s a strong element of trust in what we’ve set up – there is nothing to stop her setting up a secret Facebook account (other than violating SRR 4.2) and we’re not expecting we can control what she posts or how she responds to others. We trust our daughter and we need to grow to trust her more as she gets older. As her skills increase and our trust builds we’ll need to relax the rules. I think the first change to be made is whether we have ready access to her password or not. There are areas of her life that ought to be private, at least in the sense of not being accessible to your parents. We’re willing to renegotiate and we need her to be willing to renegotiate if we feel there’s a need.

We are fearful of our daughter being hurt as a result of being on Facebook. And we’re fearful that she may be involved in hurting others, even if it is only inadvertently. We’ve taken the lock off the gate and recognise that we need to be alert, particularly as she learns to find her feet. One day, God willing, each of our children will be adult members of the community and of the church. One day they may well have responsibility to teach their own children how to navigate a world that we can barely imagine.

As long as we live she will always be the object of our concern and love, but one day we will no longer be responsible for her choices. But for now, these are the rules.

(This article originally appeared in the Southern Cross news magazine, February edition. Ask your local Anglican church for a copy)

Trust is the key