“We must do better” 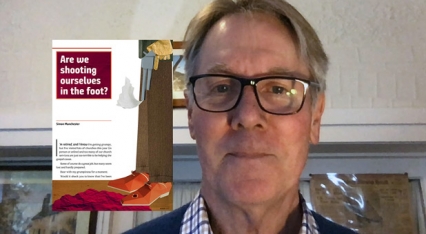 "Faithful are the wounds of a friend; profuse are the kisses of an enemy," says Proverbs 27:6 – or to put it another way, we often benefit more from being rebuked than praised.

The Rev Canon Simon Manchester has delivered a firm rebuke in this month’s Southern Cross and, although he risks upsetting some, he observes that “the stakes couldn't be bigger”.

In an essay entitled “Are we shooting ourselves in the foot?” the recently retired rector tackles the issue of services that are badly done – in leading, reading, preaching and singing. "I’ve visited lots of churches this year (in person or online) and too many of our church services are just too terrible to be helping the gospel cause," he says.

The full article is here, along with tips to do better, but Canon Manchester touches a nerve.

“I want to say I've seen some good things, and I've seen some pretty bad things,” he muses. “What particularly concerns me is that the people who gather are perhaps being presented with a very low view of God. Everything is so casual and almost careless, that there is no great sense of a great God.

“This, of course, is going to have an effect on the Christians who gather, who will be tempted to think of God in small and unworthy ways. It will not help them to bring their friends... A lot of the parts of the service that I've noticed have not really been prepared well. It's as if people get up to the front and begin to think off the cuff, which they don't do very well.”

...too many of our church services are just too terrible to be helping the gospel cause…

“I don't think it's a good model to those who have gathered. In fact, it's a bad model. I know the New Testament says that we are weak and we are. We are never going to be super-impressive to the world, I know that we need lots of encouragement at the present because things are difficult, not only in the Western world, but also with this COVID-19. But I still think that we can do a much better job in some places than we're doing. So that's what prompted me to write.”

Southern Cross asked Canon Manchester whether he was just being grumpy.

“I'm certainly capable of being grumpy,” he says. “And perhaps if I had reflected on the article for a week or two, I might have said it a little more sweetly. But I do think that I'm governed in my mind, as most believers are, by the early phrases in the Lord's prayer. That is, that we want the Lord to be honoured and glorified and we should want him to be greatly honoured – we should want people to see something of his greatness in his glory. These are vital, impressive things that should govern the way we gather."

We're representing a very great God when we stand up to speak… so we shouldn't be giving the impression that God is small or silly when we lead.

Calling for “gravitas” is not the same as being gloomy, he says. “My aim in the times of leading a service is to be serious and joyful. If you're too serious, of course, it can be gloomy. If you're just joyful, it can get silly, but to have a certain amount of gravitas, which is not very common, and to have a certain amount of gladness, which is very needful, is the best combination in leading."

Canon Manchester has also recorded a video in which he explains why he wrote so strongly about the issue.

The article goes on to point out practical ways in which leaders, readers, those leading in prayer and musicians can be God-honouring. "We're representing a very great God when we stand up to speak – not a small God, not a silly God,” he explains. “So we shouldn't be giving the impression that God is small or silly when we lead. I'm asking myself when I sit in some of these services, ‘What has prompted such poor preparation?’. It's not as though there hasn't been a week to get ready."

Canon Manchester is clear about what all those taking part in leading the service should aim for.

“Christians should be lifted and built up in their appreciation for the Lord Jesus,” he says. “When the unbeliever comes, there should also be the arresting factor where the unbeliever sits and says, ‘Well, this has been done very well. This has been very clear. This has been thought through. This has had a certain degree of weight and greatness and gravitas, as well as some happiness and some praising and some joyfulness’.

“So, the stakes couldn't be bigger than the honour of God, the building of the believers and the challenging of the unbelievers.”