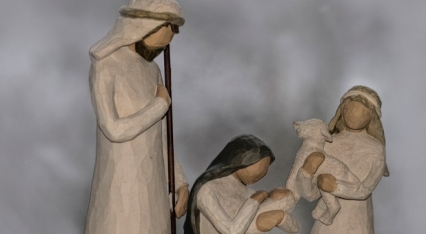 Declaring what we believe is a fundamental aspect of Christian faith. Christians are exhorted to ‘declare the wonderful deeds of him who called us out of darkness into his marvellous light’ (1 Peter 2:9). We should therefore never be ashamed to ‘tell of his salvation from day to day’ (Psalm 96:2).

Christmas provides us with an excellent opportunity to do just that. In the midst of our preparations, our present-buying and card-sending in the lead-up to Christmas Day, we should declare the salvation of our God, joining the angels’ praise: ‘Glory to God in the highest and on earth peace to those with whom he is pleased’ (Luke 2:14).

The wonder of Christmas, of course, is that God became human and took on created flesh. A bold statement that has been a stumbling block to proud minds that cannot understand, let alone accept, how divinity and humanity can co-exist together.

The early church saw the importance of the incarnation, and in particular the virgin birth, for our salvation. It found expression in the  Apostles’ Creed (‘conceived by the Holy Spirit and born of the virgin Mary’) and the Nicene Creed (‘who, for us for our salvation, came down from heaven, and was incarnate by the Holy Spirit of the virgin Mary’). These are succinct and somewhat dense statements that portray a mystery which is difficult for the modern mind to grasp. Of course, the miracle of incarnation is more to do with a virginal conception than a virginal birth. The birth is merely the result of the miraculous conception, though we tend to use the term ‘virgin birth’ to describe the mystery of incarnation from conception to birth. The wonder of God’s overshadowing of Mary, to use Luke’s description, is that Mary would conceive without the aid of a human agent, without the aid of a man’s sperm, but through the power of the Holy Spirit creating new life from a female ovum and thus generating a human zygote, an embryo which is at the same time fully human and fully God.

The virgin birth was necessary to God’s plan of salvation, so that the man born to Mary was seen to be both fully human (born of a woman) and yet without sin (not born in the usual way). If Jesus had been conceived by the physical union of Mary and Joseph, then there would be no differentiation from their other children (Matthew 13:55-56; Mark 6:3), each of whom were born into sin, as are all who inherit Adam’s sinful nature. That Jesus was conceived by Mary through the power of the Holy Spirit, not only makes Jesus unique, it enables him to be fully human yet without sin. God had been planning this event from eternity, and the initial fulfilment in King Ahaz’ day has now been superseded by the virgin birth of Jesus—God with us.

Of course, the question naturally arises, as to why Mary’s own sinful nature would not also have contaminated Jesus’ conception. This was of such concern in the early church that a mythology of Mary’s sinlessness arose in order to counter any suggestion of Jesus’ being contaminated and thus safeguard his sinless nature. However, this false teaching fails at two levels. First, the biblical witness makes it clear that Mary needed to be saved. If she were sinless, she could not have sung: ‘My soul magnifies the Lord and my spirit rejoices in God my saviour’ (Luke 2). Second, it fails the logic test in that if God could enable Mary to be born sinless (the so called ‘immaculate conception’) from two parents each with a sinful nature, why could not God enable Jesus to be born sinless, despite his mother’s sinful nature.  If the premise of the Roman Catholic doctrine of a sinless Mary was really true, namely that sinless nature cannot be born of sinful nature, then it would require an infinite regression of Mary’s lineage for her to be born sinless. However, such speculation is idle and unnecessary, for the power of God was at work in Jesus’ conception whereby he could inherit a nature which was truly human and be one like us, yet without inheriting a sinful nature.

Unless the Son of God were to become fully human, we could not be saved. Unless Jesus were sinless he could neither fulfil God’s law in its entirety nor become the perfect sacrifice for sin. Yet God’s gift is that ‘he who knew no sin became sin for us, so that in him we might become the righteousness of God’ (2 Cor 5:21).

The virgin birth is therefore a doctrine to be believed and proclaimed. Without it we would still be in our sins; with it, we have access to the Father for our brother Jesus, who shares our nature, has lived the life we could not live and died the death that we deserve.