Read the full pdf of the Presidential Address

Watch the video of the Presidential Address

Listen to the MP3 of the Presidential Address 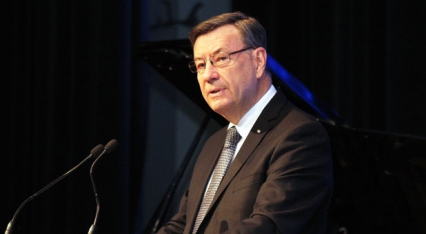 The Archbishop of Sydney, Dr Glenn Davies, has delivered a rallying address on Christian mission, persecution and perseverance at the start of the church’s 2015 Synod.

As President of the Synod, the Archbishop normally delivers a review of the diocesan activities, and a challenge to churches for the year ahead. This year, Dr Davies spoke of the challenge to acquire land and build churches in the rapidly expanding western areas of Sydney.

“Next year Greater Sydney’s population will pass the 5 million mark.” The Archbishop said. “In fifteen years it is expected an additional one million people will live within the greater metropolitan area of Sydney, with a total population of 5.9 million. Whether by birth or migration these new arrivals will be part of our mission field.”

Dr Davies also he spoke of social change and the responsibility of Christians.

“We live in a world of social change. This is not a new observation, yet it brings fresh challenges for gospel proclamation in our society, which appears to be moving further and further away from the guidelines for living which are enshrined in God’s Word. As Christians, we are at odds with the world. For good reason, John the Evangelist recorded Jesus’ warning to his disciples: If the world hates you, know that it has hated me before it hated you. If you were of the world, the world would love its own; but because you are not of the world, but I chose you out of the world, therefore the world hates you. (John 15:18-19)”

“In the same chapter of John’s Gospel, Jesus told his disciples that he had spoken these words so that his joy might be in them—in us—and that our joy may be full (John 15:11). This is an incredible promise and one that perhaps we do not appreciate, let alone assimilate, in our daily lives.
How is your joy? Is it real or feigned in the face of opposition to the gospel from your friends or family, workmates of fellow travellers?” the Archbishop said.

“The antagonism of the world to the Word of God is perhaps seen nowhere more acutely than in the virulent challenge to the definition of marriage which pervades conversations in the media, the workplace and even in our places of leisure.” Dr Davies said. “It is time that all Christians, especially Anglicans, should enter the discussion and graciously and sensitively explain the reasons why our good Creator has made marriage the way he has.  We need to be courageous in our discussions both in private and in public, yet we also need to be sensitive and loving in our defence of biblical truth.”

The Archbishop also welcomed a diocese-wide response on Syrian refugees, saying he had been able to go to a meeting with the Prime Minister ‘with detailed plans of how the Diocese of Sydney could assist, with emergency accommodation, short term and medium term, food parcels, clothing, trauma counselling, English language lessons and special holiday camps for children.’