Driscoll: Sydney you have to change!

Mark Driscoll has told a cathedral packed with Sydney Anglican clergy that there are 18 factors which are hindering the effectiveness of evangelism in our city.

Mr Driscoll has commended the Sydney Diocese for its "deep love of the Bible" and thanked God for the ministry of leaders like Archbishop Peter Jensen and Dean Phillip Jensen. 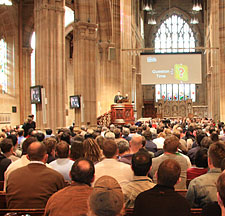 The two-day ministry intensive " which also included talks from Don Carson and Kent and Barbara Hughes " will be remembered for many years to come, said the Rev Mark Charleston of Ministry Training & Development, sponsors and organisers of the event.

"It was a remarkable and unforgettable opportunity for our ministers to hear and learn from and interact with three faithful, influential and very different Christian leaders," he says.

"Mark Driscoll may have raised a few people's eyes so they can think a little bit more carefully about what they're actually aiming to do and I think he's probably rattled a few cages in the process," added the Rev Ken Noakes, also from Ministry Training and Development.

"But where Mark has been brilliant is that he's been very helpful at speaking very clearly about what Christ has done, and challenging people to make sure they tell others about the gospel of Jesus as well."

Mr Driscoll told the crowd of 800 Sydney evangelical clergy and church workers " packed into St Andrew's Cathedral " that of all the cities he has visited, which include Los Angeles and New York, Sydney is the most similar to his home city of Seattle.

Preaching from Acts 17, the chapter he says inspired him to name his church "Mars Hill', Mr Driscoll said in a post-Christian era, the church had to guard against being a bomb shelter (a safe place where Christians "huddle together"), a mirror (which simply reflects culture back to itself, rather than reflecting God) or a parasite (taking benefits such as tax breaks from the culture, while being "seen as exceedingly selfish" by the culture).

Instead a church needed to be a "city on a hill", a missional church that is not a "countercultural kingdom".

He promoted the concept of "missiology' in his two talks " his term for evaluating the culture and pinpointing its idols " saying this must be done before meaningful evangelism can happen.

While strength in "contending" for the gospel is very important, struggle in "contextualising" that message for the surrounding culture "is historically the weakness of those who believe the Bible," he said.

Mr Driscoll's solution was for a "seeker sensible" approach to the Bible: one that didn't compromise on truth, but communicated it in a way the culture would understand, inspired by the apostle Paul as he "reasoned" in the synagogue and in the marketplace.

"What we're talking about is timeless truth and a timely method," he said.

Christians in churches were in danger of living in a "hermetically sealed world", where they watched too much Christian TV, listened to too much Christian radio and spent too much time listening to sermon podcasts rather than trying to understand the influences of secular media, he also said.

Go, see, feel and do

Exploring the evangelism method of the Apostle Paul, Mr Driscoll said the church must adopt a four-point approach to evangelism: "Go, see, feel, do", four factors he later combined under the heading of "subversion".

Mr Driscoll suggested a number of ways Sydney Anglican clergy could "go and see" their culture: using innovations like Tivo to increase familiarity with the media (in particular, television programs), keeping a close eye on social networking sites such as MySpace and Facebook (which he said were "the equivalent of the old Catholic confessionals"), talking to baristas and shopowners about what people are buying and how they are consuming, and strolling around grocery stores on the lookout for new product sections.

Every person has their idea of hell and heaven, and their own "functional saviour" to help them move from one to the other, he said.

Mr Driscoll said Christian leaders must understand what occupies each of those positions and what people in the surrounding culture "worship', asking questions like: "What do people want to have more than anything else?' "What are people most afraid of?' and "What do people make sacrifices for?'.

"We are all worshippers," he said. "Everyone is pouring themselves out for the glory of someone or something."

Like Jesus and Isaiah, Sydney Anglicans should be led by the Holy Spirit to weep over our city, especially when we see the ‘idols’ people follow. "You should feel something," he said. "Those who feel, do."

Meantime, Mark Driscoll has identified with one of the main themes of Connect09 " that making connections with those who do not know any Christians is one of the keys to future outreach.

At a press conference the week before his speaking engagements in Sydney began, Mark Driscoll was asked to comment on the year of outreach in Sydney next year.

“So my view is, not just reaching people but young men in cities is key to everything.

“So I think the key then in ‘09 would be strategic friendships with young men in cities if the culture is going to change.”

This echoes the challenge laid down by Mr Driscoll on Monday to reach and chang the city culture, as that changes in the city would flow like a river into rural and suburban areas.

"Cities are of strategic importance, because cities are upstream, where the culture is made," he said.

"Sydney is the most densely populated city in all of Australia " therefore it is the most strategic."

By 2030, Mr Driscoll said 60 per cent of Australians will live in cities.