An Australian branch of the Fellowship of Confessing Anglicans has been launched in Melbourne, watched by delegates from across Australasia at the Anglican Future Conference.

The conference brought together 460 leaders, including 40 from New Zealand, to consider ways to strengthen what the organisers describe as “positive contemporary orthodoxy” in the Anglican Church.

Archbishop Wabukala spoke at the launch of the Australian FCA branch, mid-way through the conference.

“Faithful, persevering and gospel-centred Anglicanism has been foundational to the identity of Australia and I believe that the initiative we are taking today….will be seen by future generations as a strategic moment for church and society.” the Kenyan leader said. “I long to see all orthodox Anglicans united in a common commitment to pioneering a new wave of evangelism which will have a deep and lasting impact on this nation.” the Archbishop said.

"I take great encouragement from the growth of the GAFCON movement. It is a sign that God has not abandoned the Anglican Communion. At a time when some of its branches are visibly disintegrating, we are called to be pioneers and partners in the restoration of that part of the Church of God that has been entrusted to us as inheritors of the Anglican Reformers." the Archbishop said.

Archdeacon Condie, as chairman of FCA Australia, echoed the theme of renewal at the launch event.

“The Fellowship of Confessing Anglicans in Australia is a reform movement within our denomination to enable us to reform ourselves by the Biblical Gospel.”

In some parts of the Anglican communion secular pressure to modify teaching had seen the church ‘cave in as key teaching gives way to all kinds of error” the Archdeacon said “It would be foolish to think that the Anglican Church of Australia was immune to these pressures and that we will not also see the biblical faith eroded by the world and end up in a similar place.” 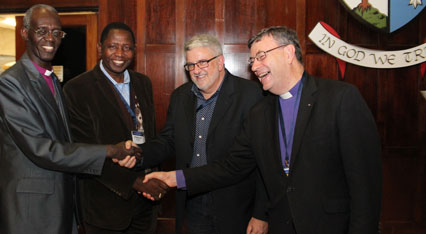 "Right now, it is true to say we have been well served by the Bishops of the Australian Church who have kept to orthodox teaching and have protected our church from doctrinal and moral error. We have much to give thanks for. However, we must be always vigilant for reform."

After the applause of the delegates gathered for the launch event in Scots Church Hall in central Melbourne, the new chairman of the Australian FCA led those present in reciting the creed, and the crowd broke into song.

The organisation began signing up members on the launch night, with Archdeacon Condie saying he would welcome people who “love the scriptures and want to submit to them as the final authority in doctrine and morals, who are not afraid to stand against the world to honour Christ and His word, who are prepared to call out error in the church and press for its reform and who want to be in fellowship with other Anglicans who together with us hold to this historic faith.”