Archbishop Peter Jensen has led a thanksgiving service for John Stott in Sydney, hailing the humility of Stott's leadership and, under God, the remarkable effect of his ministry.

The service, at St Andrew's Cathedral, concluded with "I know that my redeemer liveth" from Handel's Messiah, which the great British evangelist was listening to, when he died.

Hundreds of people, those who had known Stott and young theological students who had felt his influence, packed the cathedral for a service of thanksgiving.

Those attending were urged to share their stories about John Stott, and to share in prayer of thanksgiving to God for his life and work. 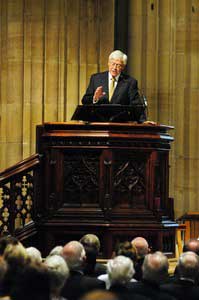 "From the middle of the twentieth century, three outstanding overseas leaders helped shape the life of the Diocese of Sydney" Dr Jensen told the congregation.

"Such leaders cannot be predicted, cannot be created, and cannot be demanded; they can only be recognised when God sends them" Archbishop Jensen said in his sermon.

Wendy Toulmin, the Australian Executive Officer of Stott's ministry organisation, the Langham Partnership, told how his work touched people around the world. 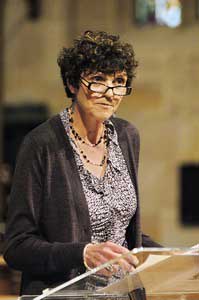 Dean Phillip Jensen, who led the service, read a note of appreciation from aboriginal ministry pioneer, Aunty Jean Phillips, who spoke of Stott's love and understanding of indigenous ministry.

The head of the Australian Fellowship of Evangelical Students, Rev Richard Chin, spoke of a mission to Sydney University when Stott lost his voice.

"In his words, he 'croaked the Gospel out' and many were saved that night" Mr Chin said.

John Stott died at his retirement home at St. Barnabas College on the afternoon of Wednesday 27th July.

His funeral will be held at All Souls Church in Langham Place on the 8th August. 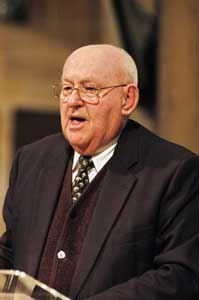 Canon John Chapman gave personal remembrances of how Stott's model of biblical, expository preaching landed like a bombshell in the diocese in the 1960's.

"I came out of one of the expositions at Summer School and I remember saying to Dudley Foord, surely that is the way all preaching should be done on Sundays."

"He said 'You've seen the model, all we've got to do is practise'....and I've tried to do that ever since" Mr Chapman said.

Dr Jensen said as a leader, John Stott was never slothful, but served with a 'fervent spirit'.

"In consequence he never let us down as so many leaders do by personal failures" Dr Jensen said, speaking from Romans 12.

"His was a cross-shaped life. In the end, nothing will take the place of the school of the cross, of the living sacrifice in response to the one great sacrifice of the Saviour" Archbishop Jensen said.