The Church Missionary Society has announced that Reverend Peter Rodgers, current rector of St Stephen's Newtown, will be the next CMS Federal Secretary.

A statement from CMS has confirmed Mr Rodgers has accepted the unanimous invitation of the Federal Council to fill the position and will start his new role in December 2011.

As Federal Secretary of CMS-A, he will lead the international ministry of CMS Australia and facilitate the work of its six state-based branches.

Mr Rodgers will replace the Reverend Canon John Thew, who has served as Federal Secretary of CMS Australia since 2001, and continues in that role until the hand-over in December 2011. 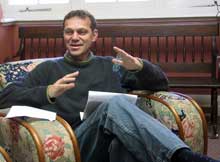 The CMS statement says “Prior to Peter's posting at St Stephen's, he and his wife Marcelle served with CMS in Indonesia from 1991 to 2002. With a passion for mission and God's people, Peter brings to the role over 20 years of ministry and teaching experience in a variety of settings, including various parishes in Sydney's west. He has served on the CMS-NSW General Committee since 2004, has been a CMS Federal Council member since 2006, and has held the post of CMS-NSW Vice Chairman since 2008. We look forward immensely to Peter maintaining the vision of seeing God’s Church growing in all the world as lives and communities are transformed by Christ. Please pray for Peter and Marcelle as they enter this period of transition in 2011.”

In the footsteps of Wilberforce

Free artwork and mags for Christmas