Archbishop Peter Jensen has appealed to Sydney Anglicans to be ‘emboldened’ by the example of Elijah.

Taking as his text, 1 Kings 19, Dr Jensen began his yearly address to the Diocese at the start of the two weeks of Synod.

“Like Elijah, we sometimes feel alone. Like Elijah we have all sorts of plans and suggestions for God. Like Elijah we look for God in wind and earthquake and fire. Sometimes like Elijah we feel the silence of God. But what we have is what Elijah was given – not God in earthquake, wind and fire, but the God in his Word. We live by faith, not by sight. Our business, whatever our situation, is to consult the Word of God, to trust it and to keep it.”

Dr Jensen continued “I want to say to you, as Elijah was emboldened by God’s Word, so you too take heart. The gospel of Jesus Christ addresses the spiritual needs of our nation in a direct and potent way and Christ’s churches constitute a powerful vindication of God’s Word and a key resource for the good health of the community. We have a Word which in blessing individuals has the capacity to renew, revive and restore human community in an age damaged by selfish materialism and individualism. Australia needs the gospel and churches which are the product of the gospel.” 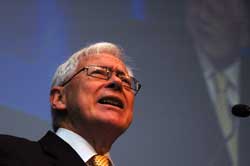 Archbishop Jensen told a number of stories which were collated by St John’s Asquith, in a book of testimonies for the church’s 90th anniversary “90 stories to God’s glory”.

In an address lasting more than an hour, Dr Jensen ranged over other subjects including the ‘social capital’ created by Christian churches in Australia and the recent legislation proposed to control poker machines and gambling.

“The penetration of the gambling culture into sport and the media bodes ill for the future of sport in this country. That which has brought us together and given us some of our most memorable moments, is now at the mercy of commercial interests appealing to our greed. The social capital created by sporting associations is being funded by the real capital of addicts. The Gillard government’s moral leadership about gambling addiction is to be commended.In the end, however, it is communities and families themselves which must have the resources and resilience to deal with this problem.”

Dr Parkinson paints an alarming picture including the statistics which show more than a quarter of young people aged between 16-24 years have a mental disorder. There is an increasing incidence of self- harming behaviour, especially amongst girls. Binge drinking and early teen sexual behaviour is becoming more prevalent. Foster care programs are stretched to the limit as children need to be rescued from abuse or neglect in their own homes.

The report is being distributed to Synod members.

“Close to the heart of what Parkinson is getting at is the state of families. He points to the fact that so many young people no longer live with their biological parents as one of the key reasons for the fragile state of our children and our homes. As Christians we have God’s mind on marriage: a man and a woman, publicly promising exclusive and permanent fidelity to each other, in sickness and in health until death do us part. We do not need the statistics to tell us - and they do – that generally speaking such a union is best for the husband and wife and best by far for the children. But the remorseless libertarianism of modern society, the determination that each person chart their own course without regard to God or the law of God, has led to an astonishing collapse of confidence in marriage as good for most people. Not surprisingly cohabitation is notoriously fragile and unstable; it does not make for human happiness or well-being and it is not good for children.”

Dr Jensen also looked ahead to the next few days of Synod.

He referred to the work of the Glebe Administration Board and SDS CEO Mark Payne in charting a course after the losses of the GFC.

“I believe that it is right to be more confident than we were a year ago. Then it was hard to see how we would advance. We had more bad news than good. The provision of money through a one off assessment was a very welcome decision of the Synod. It saved the day. I know it caused heartache, but it acknowledged that we all belong to this network and need to support each other.This year we have had more good news than bad. There are improved prospects for both our Endowments. The work done by St Andrews House Corporation and SDS to rehabilitate our income flow is a significant reason for this. For this we thank the Lord. Both Endowments are very dependent on St Andrew’s House for their income streams. Although there remains a year or two of no distributions while essential expenses are incurred and debt is repaid, there is now the prospect of satisfactory returns. In the meantime with the Synod’s goodwill we can manage the cash deficit.”

But he also spoke of the debt he owed to the members of the Archbishop’s Strategic Commission on Structure, Funding and Governance, particularly the Chairman, Peter Kell. The report of the commission will be debated on the second night of the Synod.

Dr Jensen said Sydney was committed to the health of the national church.

“In God’s providence, Anglicanism is one of the chief denominational expressions of Christianity in Australia and its presence and voice remains significant in national life. The division or dismemberment of the Anglican Church of Australia is not in the best interests of Christianity in this country.”

He outlined four basic principles which he said guided policy and relationships with the church nationally.

“We want to establish the point that the ready appeal to the law to solve relational and politicalproblems is unfruitful and to ensure that there is minimum interference with the life of the dioceses, in line with the spirit and intent of the Constitution” Dr Jensen said. “At the same time we want to affirm our strong commitment to the national church and its usefulness under God as an instrument for the defense and proclamation of the gospel.”

To the year ahead – Dr Jensen pointed out that 2012 is the tenth year of the Diocesan Mission as undertaken by the Synod at its meeting in 2002. “My major task for 2012 is to challenge us all to call on God for his Spirit blessed Word to possess our hearts and then to look for the transforming consequences.” he said.

“The test for our Diocese is always this: Will we remain completely committed to the scriptural Gospel, the one Word of God? Will we consult it, believe it, obey it? Will we be gospel people, or will our confidence and our passion ebb away?”

Returning to his text of 1 Kings 19, Dr Jensen said“It will only be by God’s grace that we do stand. The lethargy of too much busyness may engulf us. Or it may be the hunger for new things, so that we can be different from our fathers. We may demand that God does mighty works or we won’t believe in him. Scorn and opposition may erode our confidence. Elijah’s challenge, ‘how long do your halt between two opinions?’ may come on us with surprising force, not least as the culture moves further from its Christian roots and biblical teaching seems more and more discordant.

In a final challenge, Dr Jensen asked "Why do we not pray, weeping over the lostness of our sick society? Why are our prayer meetings so poorly attended, our prayers perfunctory and our attention so weak? Is it because like ancient Israel we worship the Lord with our lips and the Baals with our hearts? Are the gods of this world so beguiling to us that we have become worldly Christians slaves of fashion and gadgetry and possessions, indistinguishable fromour neighbours in the houses we own and the holidays we take and the bling we acquire? Where are our hearts fixed?"