The message lives on

Mr Eternity could never have imagined he would have crowds of Sydney-siders remembering him 50 years after his death, but that's what happened at St Andrew's Cathedral on Sunday.

But then again, he wouldn't have imagined he would prompt city authorities to emblazon Eternity in fireworks on the Harbour Bridge at the turn of the century, either.

Arthur Stace was an alcoholic converted during the Great Depression, who then went on to devote his life to reminding people of Eternity by writing the word in perfect copperplate on Sydney Streets.

Stace was ministered to by the Rev RBS Hammond at St Barnabas Broadway - a popular gathering point for the unemployed during the depression, where staff ministered to their physical needs through a soup kitchen and to their spiritual needs.

He later said he had attended St Barnabas' Broadway that day in August, 1930 'to get a cup of tea and a rock cake. But I met the Rock of Ages'.

After his conversion, it was a sermon at the Burton Street Baptist Church Darlinghurst (now the Eternity Playhouse), that gave him a mission.

"I was listening to a man one day, in Burton Street Baptist Church, a man called John Ridley, the Australian evangelist. And he was preaching on Eternity. And he said these words, “Eternity! Eternity! Where, oh where, will you spend eternity?” And the Lord laid it on my heart, there and then, to go out and write “Eternity”. I went straight out and I’ve been writing it for twenty years." Stace said in a radio interview in 1964.

More than 300 people attended the service at St Andrew's Cathedral, Sydney to commemorate the 50th anniversary of his death on Sunday 31 July.

Among the congregation were Sydney City Councillor Linda Scott and  Elizabeth Meyers, the daughter of Rev Lisle Thompson.  Rev Thompson was Stace's pastor and co-wrote the tract of Stace's life and conversion, 'The Crooked made Straight' after Stace admitted to him that he was the man responsible for the thousands of chalked 'Eternity' messages that had appeared on Sydney streets for more than 25 years. 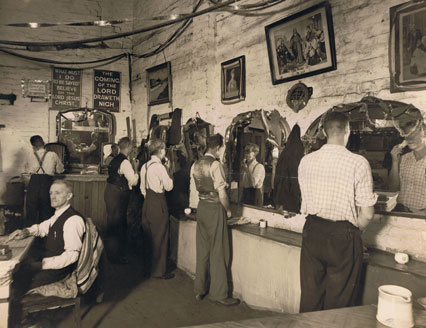 The Dean of the Cathedral, Kanishka Raffel preached on the Parable of the Tax Collector and the Pharisee (Luke 18:9-14). It is believed that it was this text Arthur Stace heard the day he gave his life to Christ.

"Stace's life was dramatically changed by his conversion to Christ.  He gave up drink and crime, and threw himself into the ministry of assisting down and out men with practical help.  He also became a preacher and spoke in hostels, gaols, churches and on the streets of all that Jesus had done, and what Jesus had done for him.  He wrote his 'one word sermon' more than 500000 times over 35 years, not being 'discovered' until 1956." the Dean said.

Mr Stace's life was also celebrated at Hammond Care at Hammondville, the suburb named after the rector of St Barnabas, the Rev R B S Hammond.

Arthur Stace spent his final years as an aged care resident at Hammondville before dying of a stroke on July 30, 1967.

“They began when Arthur, an impoverished alcoholic, joined hundreds of other unemployed men during the Depression in visiting the mid-week ministry of Rev Bob Hammond at St Barnabas Broadway,” Dr Judd said. 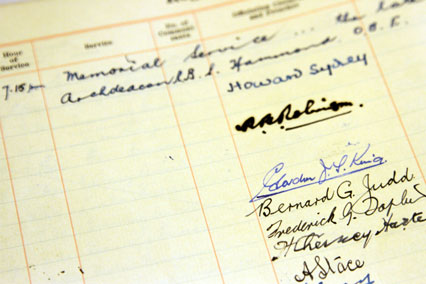 “Rev Bob Hammond had an extensive social welfare program and Arthur Stace became a keen collaborator. He served as ‘Emergency Depot Missioner’ at one of the ‘Hammond Hotels’ [refuges] - the subject of a rare Stace photo held in the HammondCare archives. (see photo above - Stace is seated)

“Rev Hammond also established a home ownership scheme for destitute families during the Depression and this ‘pioneers settlement’ became home to more than 500 people. We believe Stace visited the ‘settlement’ near Liverpool in its early years and he signed his name in the church register of St Anne’s, Hammondville, on the occasion of the Memorial Service for Rev Hammond in May 1946." Dr Judd said. (see photo)