Year 13 graduates told ‘Don’t be fooled by the world’

Before a crowd of more than 900, the graduates attended the last official duty of the year long Youthworks programme.

The year included the largest ever mission trip to Fiji, described as 'very significant' as it included a major training effort on the island of Vanua Levu.

Mr Anderson drew on his long career in public life to charge the graduates to "understand the world but do not be fooled by it."

"Hold tight to the truths revealed to you" Mr Anderson said.

The former leader of the National Party told the audience gathered at the Danebank School auditorium that the western world is in the midst of a major moral crisis.

His address ranged over the political, economic and spiritual outlook in the west.

To the parents of friends of the graduates he spoke of the self-centredness of the secular society. "How are families going to raise the next generation to think beyond themselves?" Mr Anderson asked.

"You don't have to show your children how to worry about themselves .... You don't actually have to sit down and say to little Johnny 'The great key to life is it is all about you'. Do you? It comes innately and if it goes unchecked, it's a disaster. Yet, that's the value that our post-Christian age has promoted as the appropriate one to live by." 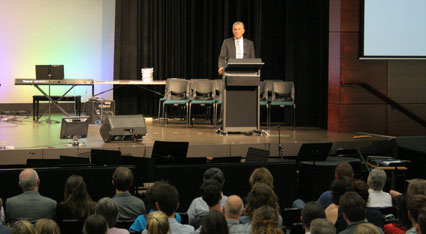 "These are real issues we need to grapple with" he told the graduates. "They are not reasons for us to give up or to live in ghettos. they are reasons for us to engage wisely, with courage and with compassion undergirded by humility. But the world is in the mess that it is in because we have deserted the beliefs that drove the values that drove the behaviour and the ethics that made our societies such wonderful places, in worldly terms, to live in. And we need to again point people to the core of those beliefs."

Students came mainly from Sydney but also from other parts of Australia including Cairns, Townsville, Wellington, Maitland, Lismore and Noosa.

Members of the parish council of Campbelltown Anglican Church attended to support their three graduates, the third time the parish had sent students to the Year 13 program.

"We are seeking as a church to make a significant investment in the Christian growth of young people and the Year 13 program is one important way of doing that" Campbelltown Rector Nigel Fortescue told sydneyanglicans.net after the graduation. "Parish Council members were keen to attend so they could broaden their vision of Year 13 and understand more of the important work of grounding young people in the Gospel. We have seen God at work in the lives of our students and are very thankful for the way the program broadens their understanding of and vision for ministry and the Christian life. We are looking forward to having another Year 13 student next year and to seeing the momentum for this important training year grow among our teenagers." Mr Fortescue said.

As a final charge to the students, Mr Anderson told them "As you go out into the world be courageous but do not be seduced or fooled by it. In the end to know God, the true God, is eternal life. It is about knowing Jesus. It's not knowing about Jesus. It's knowing Him."

"Western man has come to hate the truth and to deny it and to mock it and to distort it. But if you have met Jesus then you will know that nothing else matters by comparison" Mr Anderson said.