Back to basics from one pastor to the next

The author of evangelistic course Christianity Explained is encouraging Sydney Anglicans to go back to basics with a new course seeking to give newcomers an overall picture of the Bible.

Queensland-based pastor, the Rev Michael Bennet, who created Christianity Explained course over two decades ago, told Moore College staff and students on Friday that he wants to reach generations of people who have next to no Bible knowledge.

He explained that Christians can do this through his new course, The Bible Explained.

"In writing The Bible Explained, I set myself this limited goal " how can I help a raw, new believer, with little or no Bible knowledge, to grasp the overall message and thrust of the Bible?"

Mr Bennet has created an eight-week course that covers from Genesis to Revelation in "seven journeys'.

"There are seven great journeys in the Bible and if you can get them in your mind, you have the major structural elements of the Bible," Mr Bennet says. 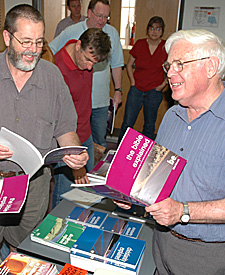 The seven journeys are those of Noah, Abraham, the Exodus, the Exile, Christ's journey, the Gospel's journey through the Apostles and finally the journey Christians make towards Heaven.

"It's looking at the Bible like a big mountain range where all you see are the peaks of mountain and you leave out the detail for people to catch up on later," Mr Bennet explains.

"I have also discovered the course to be a useful tool with non-Christians seeking the truth, and with older believers whose Bible knowledge is often a mish-mash of disconnected stories and verses."

Mr Bennet says the course works best in the context of one-on-one or leader and trainee with a couple.

"If you have a big group, members often miss sessions here and there, so some people could miss hearing key elements of the Bible story such as the crucifixion or Abraham's journey," he says.

"I prefer leading one-to-one, or with a couple because that way you never lose continuity."

Mr Bennet says it took him 14 weeks to do the eight-week Bible Explained course with an engaged couple, but it was well worth it as the husband became a Christian by the completion of the course.

"It took 14 weeks because the couple got married and took their honeymoon during the course. I volunteered to go on the honeymoon with them but they knocked me back," Mr Bennet jokes.

"At the end of the course I was able to say, "You can see now that Jesus is the centre of the Bible. Christianity Explained seemed like a natural follow-up which we have now completed."

Mr Bennet, who trained at Moore College after completing architecture at university, is promoting The Bible Explained teaching manual and DVD resource in Sydney Anglican churches during this week.

"These launches are for pastors, ministers, Bible study leaders and evangelists, not for people seeking to understand the Bible better. Your leaders will be trained to do that."

Mr Bennet says he wants Christians everywhere to be equipped to share the Bible's big picture in a simple manner.

"I want new Christians and non-Christians to know the basics of theology and not to be afraid of the word "theology' " all it means is "knowledge of God'," he says.

#54 Hands Off Our Ovaries