I want my children to have eternal life

The day I realised my kids might not go to heaven was the day I became preoccupied with creating space for God to do his work in them.

As a single mum, I want to ensure my children have a strong spiritual base, because the statistics are sobering.

The latest report prepared for Youthworks in 2018, based on National Church Life Survey data, identified that 78 per cent of respondents became Christian before the age of 20. Of the respondents: 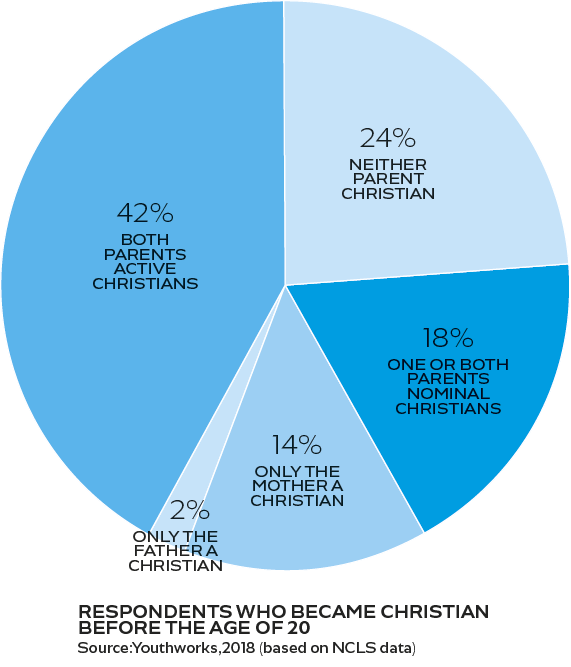 Reports prepared over the past two decades display similar results, but we shouldn’t put too much faith in statistics. There isn’t enough data and numbers by themselves don’t give us context.

A parent’s influence is crucial

The data does tell us that the influence of parents on future faith is crucial. Of those that became Christian before age 20, 76 per cent became Christian with one or both parents as active believers. It is up to God whether they take the step of faith, but we are the instrument through whom God works. The statistics show us we need to be aware of the extent of our influence as parents.

42 per cent became Christian with both parents as active Christians

Other questions arise for families where there is only one believing parent, or in single parent homes. How can a mother take spiritual lead without emasculating the father and alienating him from the faith also? How does one parent compensate for the lack of the other in single parent homes? How can our churches help all families to have a positive influence on their children’s faith?

Author of Big Picture Parents, Harriet Connor, advocates an apprenticeship model rather than the school style teaching we are familiar with. She suggests we show our children the way, walk with them on the way, and then let them practice while we supervise before they take on the journey as their own.

"We must consider the activeness of our faith."

This means modelling. This may seem obvious, but statistics tell us we must consider how to demonstrate faith in action throughout the day. We need to infuse the natural rhythms of the day and the week with our open participation in the gospel, not cordoned off into five minutes at the end of the day. And always in prayer. Mrs Connor, who is content editor for Youthworks Media’s Growing Faith website, notes that it is our trust in a sovereign God that we are passing on, not simply a personal quality like work ethic.

For homes with one believing parent, the encouragement in 1 Peter 3:1 is for believing spouses to win the other parent over through conduct, and not take charge of the faith journey at the expense of the other parent. For single parents, Mrs Connor points out that God is still sovereign and is not surprised by anyone’s situation. The Bible gives us examples of people who came to faith without both parents, such as Rahab and Timothy, and so we should not feel like outsiders.

Parents and churches need to work together

Church is a powerful means of support. God placed us in community and this community also supports parents where they need help.

Data shows that youth group, children’s ministries and church services are also important influencers in a Christian’s faith, but with mounting pressure on our time, many parents can accidentally treat church as an extracurricular activity.

Ed Springer, former Head of Ministry Support at Youthworks, observes that parents often choose a church based on what it provides for children. Many churches advertise activities to attract families, which has the unintended consequence of feeding into consumer expectations. Neither are wrong but move us away from churches and parents partnering together effectively.

“The church and the parents are coworkers on the same mission to see the next generation receive the knowledge of God and then pass it on themselves,” says Mr Springer.

Churches can strengthen parents discipleship so they can actively model their faith. The church can equip parents to meet the challenges of the children’s doubts and rebellions – which both Mr Springer and Mrs Connor say will assuredly occur.

This support is key for single parent families

The additional role models, peer support and prayer support a church provides is a pivotal help for single parent families, without being a parental replacement.

For single parents like me, these statistics can feel bleak. Looking at this research through the lens of the gospel shows us the means by which we can build, in him, the most fruitful approach to caring for children. There is an opportunity God is giving us to use the church to equip parents to disciple their children. Whatever time God provides us with, we use it wisely to provide our children with a rich faith-based environment – whether we have every day as a full time parent or every other weekend.

Parents and churches are co-investors in the long term faith journey of the children of God’s community. Together they can create a rich and active faith environment for children to grow in, and create space for the Spirit of God to do his work in the hearts of our kids.

1.
A guaranteed way to deepen your faith
2.
What our past teaches us about youth ministry now
3.
“A rare opportunity to show God’s love… in very special and practical ways”
4.
The partnership that positively impacts your child’s faith