Christians ‘horrified’ by latest IS massacre 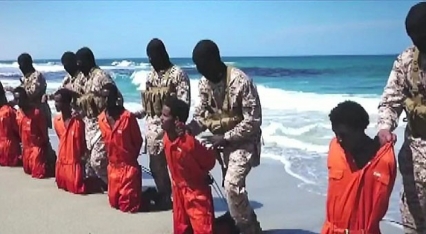 The Anglican Bishop for Ethiopia has hailed as martyrs 28 Ethiopian Christians shot or beheaded in Libya by members of the terrorist group known as ISIS or ISIL.

"I have just learned the horrifying news that as many as twenty-eight Ethiopian Christians have been shot or beheaded in Libya by members of the terrorist group known as ISIS or ISIL. This alarming act of violence against those that ISIS calls “people of the cross” comes just two months after twenty-one other Christians - twenty Egyptians and one Ghanian, were beheaded on a Libyan beach." Bishop Grant LeMarquand said in a letter to be read in Ethopian churches and distributed overseas.

"It is too early to learn the names of these newest martyrs. It is also too early to know what churches they came from." the Bishop said.

The Ethiopian Orthodox Church has more than 30 million members, but there are also many other churches Ethiopia, including at least 15 million Protestant Christians

"Personal details about the men who have died may emerge. For now we can note the most important things to be said about these victims. Their names are known to God and they are written in the Lamb’s book of life (Rev 13:8). Their denominational affiliation is no longer of any importance: they are among the unnumbered throng from every nation, tribe, people and language gathered before the throne and the Lamb (Rev 7:9) who have come out of the great persecution (Rev 7:14) and have had every tear wiped away from their eyes (Rev 7:17)." Bishop LeMarquand said.

In his letter to Ethiopian churches, the Anglican leader also warned against hate. "How are we Christians (those of us in Ethiopia as well as around the world) to react to this most recent atrocity?" he asked.

"First, we must look up to God in thanksgiving for the lives of these brothers who loved not their own lives, but followed Jesus in the way of the cross. Second, we must ask for the Holy Spirit to strengthen us to abandon the temptation to hate. Instead we must follow Jesus, who not only suffered death on the cross, but also prayed for his executioners to be forgiven. If we are turned to hatred, the terrorists have won. Finally, we must continue to reach out to a world desperate for the love of Jesus." the letter says.

"Make no mistake, the terrorists who executed these martyrs of Ethiopia have exhibited the worst of human depravity, but they have also revealed their desperate need of a Saviour. The apostle Paul, a great persecutor of the church of God, was turned to love by his experience of meeting Christ on his way to the Syrian city of Damascus. May God use his church to so act and speak of and from the love of Christ that many former or potential persecutors may be turned and have their named written in the book of life."

Immediate support came from Kenya, where Islamic terrorists struck at Easter, singling out Christians and killing 147 students at the Garissa College.

"We share with you and the people under your pastoral care the pain of such a great loss." said Kenyan Primate Eliud Wabakula, in a message to Bishop LeMarquand. "Coming so soon after a similar loss here in Kenya,we are united in your prayer in the faith that we follow the example of our savior and Lord Jesus Christ." the Archbishop said.

In Sydney, Archbishop Davies also sent a message of support.

"We mourn with you and the Ethiopian church.  Our hearts are heavy at the suffering caused by such depraved acts.  As the company of martyrs grows, we cry out 'How Long, O Lord?".  Be assured we hold you in our prayers at this trying time." Archbishop Davies told Bishop LeMarquand.

Photo: A scene from the IS propaganda video of the executions